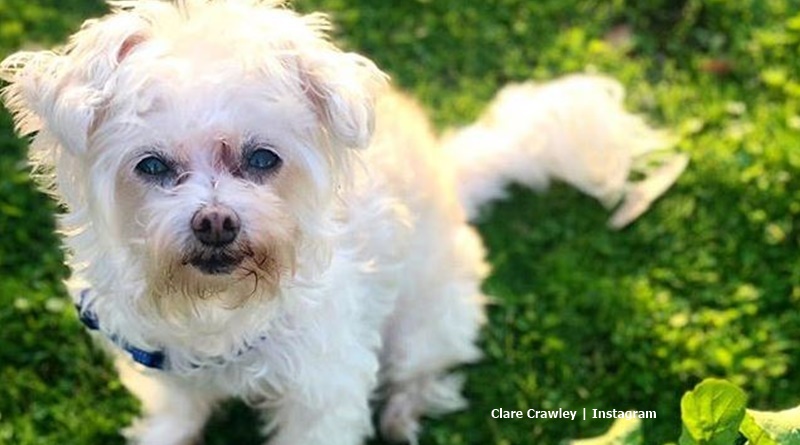 Bachelorette fans who watched the premiere on ABC this week heard Clare Crawley talk about seeing a therapist. And most people agree, it’s a good thing if you feel a bit anxious or depressed. Well, Clare went for therapy and her therapist suggested she find a dog. And, now, she credits her doggie with saving her mental health.

We reported that Couples Therapist, Dr. Kirk Honda analyzed the premiere, especially when Clare met Dale Moss.  He said that when she met Dale, Clare obviously experienced an “electrical” moment.” And, she displayed a “physiological reaction to Dale.” Kirk believed that her “love at first sight” looked genuine. But, we never mentioned that he really liked the fact that Clare said she attended therapy.

Now, more details about her therapy emerged when she posted up a photo of her dog on Instagram. The picture of Elbie looked super-cute. And, she captioned it with, “When my dad passed away, I started developing the WORST anxiety and depression.” It sounds quite severe actually, as the Bachelorette star elaborated more. She noted that if she left the house, she “suffered a full blown panic attack.”

Talking about her therapist, Clare said that she suggested that find herself “a dog.” Then she talked about Elbie, saying “he gave me life! (So much so, that I almost named him Paxil!).” Of course, little dogs need walks, so slowly and determinedly, Clare took him out of the house. Twelve years passed sinc then, so little Elbie grows old and a bit creaky.

The Bachelorette star wrote, “I sit here cuddling his creaky little bones.” And she thinks of everything Elbie went through with her. “He truly has been a life saver, and I wish everyone could be so blessed,” she wrote. Of course, fans love stories about dogs. And those who share their life with a dog agreed that they help with mental health. Mentioning the age of her dog prompted one notable comment. They said, “They have done their job at this point and now it’s all about spoiling the hell out of them!!”

When my dad passed away, I started developing the WORST anxiety and depression. It got to a point so bad that I couldn’t leave my house without having a full blown panic attack. I was seeing a therapist (bless her) on a regular basis and she suggested I get a dog. That’s where this little dude came in! He gave me life! (So much so, that I almost named him Paxil!) One foot in front of the other I began taking him on walks, which got me out of the house. Cut to now, 12 years later, and as I sit here cuddling his creaky little bones I can’t help but think of all the things he has been through with me. He truly has been a life saver, and I wish everyone could be so blessed to have their own little Elbie ❤️

Fans discuss the value of dogs

One ABC fan said, my “Chiweenie…I rescued him, but really he rescued me. A true spirit guide and beacon of light if there ever was. Doggos are the best thing God created💕.” And then, another fan dropped this comment: “I used to have terrible anxiety and night terrors even years after a traumatic event. I too was advised by my therapist to get a dog (I wanted one anyway) and it changed my life! 🐶 It is amazing that God created creatures to help and love us!”

What do think about Clare Crawley of The Bachelorette crediting her dog with saving her mental health? Do you agree that God made dogs as companions and healers? Sound off in the comments below.