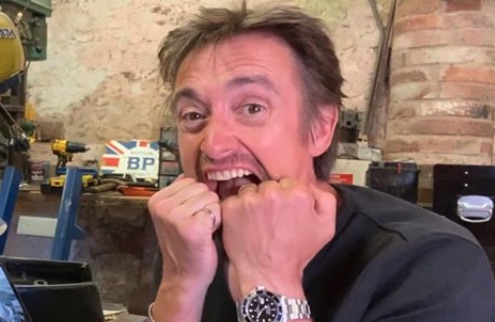 The Grand Tour stars have already wrapped their Scotland episode and are safely back home. Despite taking inordinate precautions to keep everyone safe during this time of Covid-19, they appear to not have improved Richard Hammond’s ability to crash a car.

What do we know about Hammond’s Scottish car crash?

As 2020 has been a rather crazy year, it should be of no surprise to The Grand Tour fans that Richard Hammond has crashed his car. Again. According to The Grand Tour Nation, this happened in their recent nine-day trip to Scotland.

Although they were technically on home turf, there were plenty of obstacles. One was that the team was concerned that the Scottish border would be closed due to the increased number of people getting the coronavirus. The cast and crew feared they would not be able to return to England.

Then there was Covid-19 itself. They had to be very careful to follow the rules and avoid getting anyone sick. This meant staying in a bubble and social distancing. They wore masks, except the cast when they were filming.

Richard Hammond’s Accident ‘Was A Good One’

Now for the show. The trio each took a classic American car, with a caravan (camper trailer) hitched in the back, and drove from Edinburgh to the Hebrides. Eventually, they removed the said caravans for a bit of drag racing.

The Cadillac, Lincoln and Buick were modified with drag racing tires, a supercharger and side-exit exhausts. But, there was a bit of a mishap. We can assume that this is when Richard Hammond got into an accident.

Jeremy Clarkson painted the picture. “Astonishingly, thanks in part to the rules but mainly to luck, not one of us tested positive on the whole nine-day shoot. Which meant all the cameras were rolling when Hammond had his customary accident. It was a good one.”

Was Richard Hammond hurt? Clarkson gave us that answer, after he described the accident. “Probably his best yet, mainly because he didn’t actually hurt himself. I guess that’s lucky because, strictly speaking, he wouldn’t have been allowed by the Covid rules to go in a stranger’s air ambulance.”

Any News On When The Grand Tour ‘Madagascar’ Episode Is Being Released?

As we head into the end of the year, The Grand Tour fans want to know what happened to the “Madagascar” episode. It was filmed before the coronavirus pandemic began. But, it was still a Covid-19 victim.

Long-time producer Andy Wilman got the dangerous virus. This was before he could sift through over 1,000 hours of video footage. By June, he was working on it and by August, they delivered it to Amazon.

Now fans are waiting for Amazon to make the big announcement. Well, they are now one step closer. According to IMDb, “The Grand Tour Presents: Madagascar” will be in Season 5, Episode 1.

This likely means two things. The first is that Season 4 will only be the one episode, “Seamen.” The second is that the “Scotland” episode, will likely be Season 5, Episode 2.

How long will the “Scotland” episode be? Since they were only in the Scottish Highlands for nine days, they likely just have 70 to 100 hours of footage. This could still mean that that they could come up with a good hour or so of interesting footage to air on Amazon. Of course, the Richard Hammond accident could easily take up a good 20 minutes.

Will There Be More Season 5 Episodes?

As the pandemic will likely dominate 2021, can The Grand Tour trio make another episode somewhere in the U.K.? Hopefully. Perhaps they could go to the Orkney Islands or visit a remote area of Wales. With an entourage of about 50 people, it is definitely a challenge to keep everyone safe.

But pandemic or not, Richard Hammond will always be at risk of another spectacular crash.