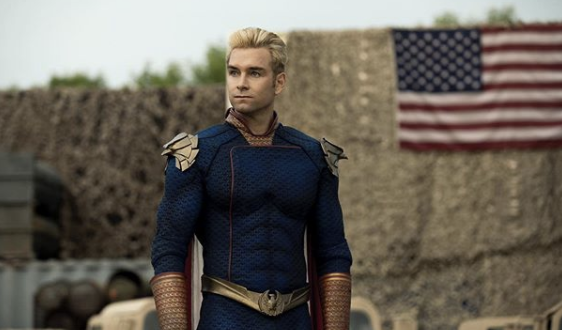 We all know Homelander can be a bit unstable. But where will the writers take him next year? Heads up! This article will definitely contain spoilers for The Boys Season 2. Read at your own discretion.

When we left Homelander at the end of Season 2, he was definitely in the middle of a mental break. He was on top of a skyscraper for lewd purposes screaming, “I can do whatever I want!” into the night. According to the actor, Antony Starr, the writers could be setting him up to become a “homicidal maniac.”

“There are two words that Eric [Kripke] has said to me about Season 3,” the New Zealand actor said to Collider. “His description for Homelander Season 3 was, ‘Two words, homicidal maniac.’ That’s all I know.”

And this definitely makes sense. In Season 2, we saw moments where Homelander nearly lost his grip on reality and snapped. In one scene, he faces a crowd of angry protestors. For a brief moment, he considers blasting the crowd with his laser vision, killing them all. Could his violent visions soon become reality?

“I’m actually looking forward to seeing Homelander off the leash,” Starr said. “It’ll be really fun, just seeing him go unhinged and exact revenge. If you look at the end of Season 2, some people should be more scared than others, for sure. William Butcher should always have an alarm bell ringing in his head, and I think some other people have firmly put themselves in the line of fire for Season 3.”

Homelander and Butcher will always be at odds with one another. But who else do you think could be on his hit list? Queen Maeve betrayed him in the season finale, so she may have to watch her back as well.

The Boys fans also want to know about Black Noir. As Eric Kripke notes, this deranged man of mystery quickly became a fan favorite. But when we last left him, he was in a vegetative state. Knowing Black Noir has a tree nut allergy, Queen Maeve shoved an Almond Joy in his mouth and kicked away his EpiPen. But don’t worry — he’ll be back.

Showrunner Eric Kripke recently addressed the situation in a Q&A session on Twitter. He didn’t give details but confirmed Black Noir would definitely be back for Season 3. He teased that fans would get an origin story and may even get a chance to peek under the mask.

Now in the comics, Black Noir is a Homelander clone. His purpose is to keep an eye on the leader of The Seven and take him out if he becomes too unstable. And Homelander is clearly starting to lose it. This situation may soon be addressed.

However, the show doesn’t always follow the comics. There’s always a chance that Kripke and the rest of the creative team will go in a different direction for Black Noir’s origins. Some fans believe in the television version, Black Noir is Stan Edgar’s son. Do you think this theory holds water? Let us know.

The Boys plans to begin filming in February, so hopefully, we will see Season 3 next fall. Of course, this all depends on the pandemic. Stay tuned for more information.