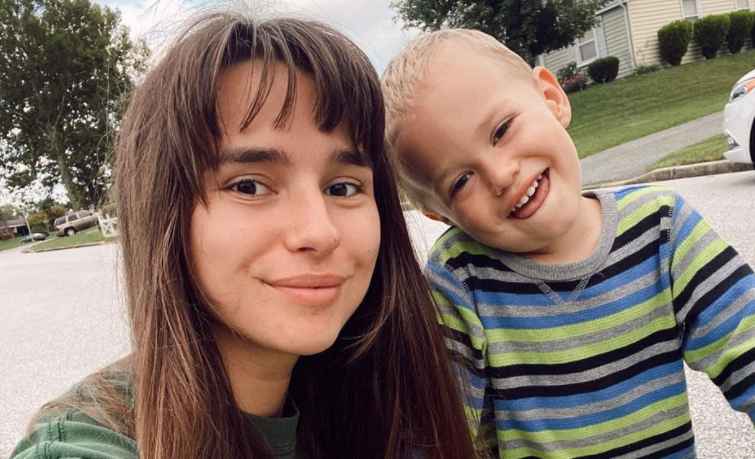 It is good to catch up on former 90 Day Fiance alums, to find out if their relationships worked out. Sometimes it is good news, but occasionally we find the couples have split. This is the case with Season 6 star, Olga Kosimbetova and her husband, Steven Frend. Olga took to Instagram recently to announce her split from her estranged husband after only one year of marriage.

Olga, 23, made a post to Instagram on October 12, sharing an image of herself and her two-year-old son, Alex. Her caption was merely a red heart emoji. There was no direct mention of a split between Olga and Steven, 22. However, Russian fans inquired about their relationship in the comments. They wrote that Instagram rumors say she and Steven had broken up. However, the fan did mention this is probably a private matter.

The Russian beauty’s reply, translated to English, reads, “I have not written a post on this topic, but at the moment, as a couple, we are not together. Hopefully all for the best, but for now I don’t want to comment on this.”

Steven had already announced the breakup

As noted by In Touch, Steven announced their split in his Instagram Story of October 10. He mentioned that people keep asking him if he and Olga are together. Frend went on to say that they had gone into the relationship “super blindly.” Steven pointed out that a lot of their story was left out of 90 Day Fiance. He said they have since learned a lot about each other and they feel they are better at being co-parents to their son.

Frend said they are “civil and cause no drama” because Alex’s mental health is their top priority. He post-scripted, writing that people shouldn’t assume they know the whole story from one little post.

Olga and Steven in 90 Day Fiance

Fans met Olga and Steven during Season 6 of the popular TLC reality show. The couple met while Olga was enjoying a vacation in Ocean City, Maryland and the meeting turned into a summer fling. Steven was working in Ocean City at the time.

At the end of Olga’s trip and shortly prior to her return to Russia, Olga told Steven she was pregnant. Both parties were determined to make their relationship work, so they dated long-distance after Olga returned home. She went on to spend most of her pregnancy alone at home.

Fans watched Steven’s journey to Russia to be with Olga for the birth of their son. Totally smitten with mother and child, Frend proposed to Olga before he went home and she said yes. On arrival home, Steven started the K-1 visa process to allow Olga to legally enter the U.S. as a fiancé of an American citizen. This gave them 90 days to wed after her arrival in America.

The K-1 visa application was approved in April 2019 and Olga moved to the States with baby Alex. They went on to marry in August of that year. While it is sad to discover Olga and Steven have since split, their decision to co-parent their lovely child is admirable.