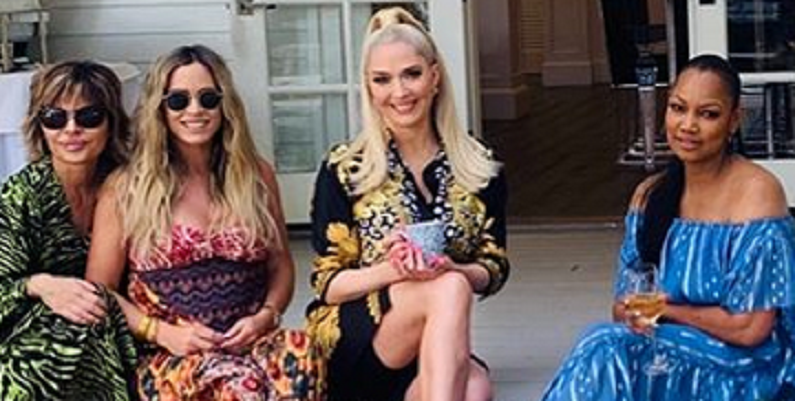 Teddi Mellencamp addressed Garcelle Beauvais’ reaction to her RHOBH exit. In an interview with Entertainment Tonight, The Real co-host reacted to the cast changes. The journalist asked her how she felt about Teddi’s exit from the show. Garcelle paused for 10 long seconds before saying, “OK.”

That’s all she said. RHOBH fans claimed that Garcelle’s reaction was shady. Fans prasied the Coming to America star for her boldness and fierceness. Meanwhile, Teddi was slammed for the way she handled Brand Glanville and Denise Richards’s drama. As fans remember, Garcelle was one of the few fans who sided with Denise.

Find out what Teddi has to say about Garcelle’s reaction to her exit.

In an exclusive interview with Us Weekly, the RHOBH co-star addresses Garcelle’s response to the news of her departure. The 39-year-old accountability coach was shocked to hear about Garcelle’s response. Apparently, she had no idea. But Teddi had nothing but good things to say about the 53-year-old.

“I didn’t even know [she did that]. Well, I mean our thing at the reunion [could be why],” Teddi revealed in the  Tuesday, October 13 interview. During the RHOBH Season 10 reunion, the two argued over Garcelle’s comments on Lisa Rinna’s Instagram dancing videos influencing her daughter Amelia Gray’s eating disorder. Despite their differences, Teddi said she likes Garcelle and called her “funny and beautiful and smart.”

“I made a good point at the reunion,” Teddi said. “So, she’s probably bitter about it. But other than that, I think she’s great, and I think she’s gonna have a lot of success on the show, and I’m excited to watch her.”

How does John Mellencamp feel about Teddi’s departure?

Apparently, the legendary musician is taking it harder than Teddi Mellencamp is. She revealed his reaction to her RHOBH exit. He’s unsure if he should continue to watch the show, knowing that she’s no longer on there.

“He’s like, ‘Am I not going to be watching anymore?'” she exclaimed. “I’m like, ‘I don’t know, Dad. You’re going to have to make that decision yourself.'”

Teddi added that the 69-year-old musician “just started watching Housewives” simply because she was on it.

“He started becoming, you know, like, ‘Oh, I love her, blah, blah, blah,'” the personal trainer continued. “And then [he] has nicknames for everybody.”

Teddi confirmed on Instagram that she would not be returning to the Bravo reality series for Season 11. In an emotional clip, she revealed that the network decided not to renew her contract. Since then, Teddi revealed she has been in touch with “most” of her former RHOBH co-stars since the exit. She made it clear that she doesn’t want their friendships to change.

“You have to, kind of, put it out there and be vulnerable. Like, ‘Listen, of course, my feelings were hurt when all this happened, but l love you and I care about you and I still want to hear about you and I don’t want anything to change and you don’t have to worry about that,'” Teddi said.

The entrepreneur has no regrets about being on the show. Instead, she sees it as a “learning opportunity” for bettering herself. Teddi will continue to focus on her All In program amid the controversy.

Hearties Insist ‘When Calls The Heart’ Author Janette Oke Would Never Have Picked Lucas
’Record Of Ragnarok’ Season 2 On Netflix: Canceled Or Renewed?
Mariah Brown Makes Rare Appearance On IG With A Strong Message
It’s On! Where Will Amy Roloff Marry Chris Marek?
Josie & Kelton Balka Bond With Daughter Willow While Baby Is In NICU