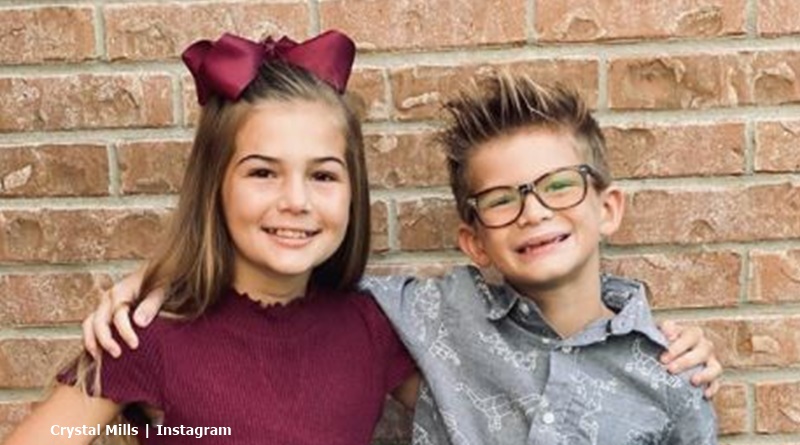 OutDaughtered fans see a lot of posts by Danielle Busby and her sister Kiki when the kids go to school. Now it’s time for those school pictures. And, both families shared about it. But, when Kiki posted up about McKenzie and Bronson, Uncle Dale chipped in. So, she bantered back at her husband.

We reported that mom Kiki, the wife of Dale Mills, announced the start of virtual school for her kids in August Bronson started second grade and McKenzie went into fifth grade. Now, a few months on, the scene changed a bit in Texas. The kids all enjoyed the federal holiday this week. But, it’s time for school pictures. In her Instagram Stories, Danielle promised updates on what the quints wore. Now, their cousins, Bronson and McKenzie also chose their outfits.

Aunt Kiki, well known to OutDaughtered fans, shared her kids’ outfits. And, they look very smart. In the comments, she revealed that McKenzie selected her plum-colored jumpsuit at Target. She also wore a big plum-colored bow in her hair. Then Bronson, quint Riley’s fave cousin chose a gray shirt with white patterns on it. They both looked cool and cute. And, fans commented. One said, “Love Kenzie’s jumpsuit. Must get for my daughter.”

More fans talked about the kids. And, one of them noted, “Beautiful children! Kenzie is absolutely beautiful! Love the bows! Also she has such perfect eyebrows! Really so prominent lucky girl lol.” And, another follower wrote, “Cool school picture of Kenzie and Bronson and cute target outfits.” But sure enough, along came Uncle Dale. He comments on nearly every photo that his wife shares on Instagram.

The OutDaughtered uncle wrote, “Heirs to the Lord!” So, Aunt Kiki bantered back at him, “The kids are very lucky. Their father is a lord :D.” And, a fan also teased him with the hashtag “#lorduncledale.” But fans become used to Dale joking around, and Kiki’s quite sharp as well when it comes to banter. The Inquisitr reminds fans that “Dale Mills is the cool uncle that every kid needs: he cracks wise, likes to laugh and have a good time, and is an all-around swell guy.”

Cousin Parker also chose a jumpsuit for her school picture

Meanwhile, over in the Busby home, quint Parker also selected a jumpsuit for her photo. Similarly to McKenzie’s photo, she also revealed a liking for plum-colored clothing, but not quite as deep a shade. Danielle shared the picture and said that the outfits came from her “Graeson Bee” line.

What did you think about Aunt Kiki bantering about Uncle Dale being a “Lord?” Sound off your thoughts in the comments below. Remember to check back with us often for more news about the cast of TLC’s OutDaughtered.