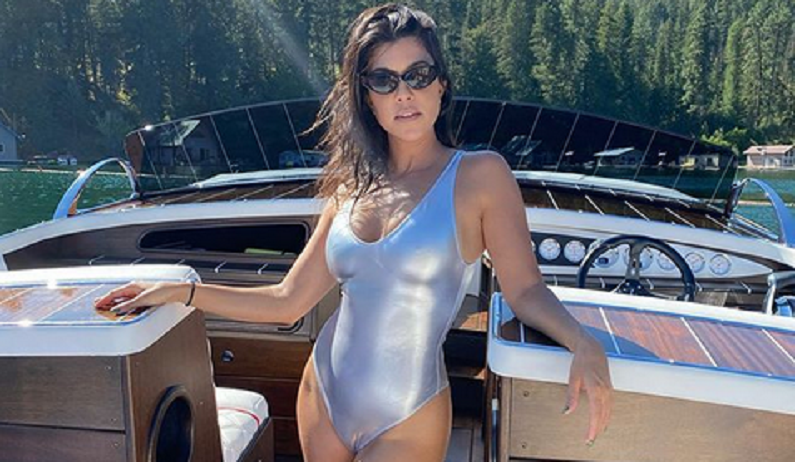 Kourtney Kardashian lit up social media with her latest photos. The Keeping Up With the Kardashians star posted a series of sizzling bikini photos. Recently, fans grew tired of her bikini photos with 19-year-old TikTok star Addison Rae. They dubbed their photoshoots as “creepy” and “weird.”

Previously, fans slammed Kourtney for hanging out with the young internet sensation. Kourtney is a 41-year-old reality star with three children. While she’s not a senior citizen, her friendship with Addison is questionable. Fans think she should be more focused on raising her children.

On late Wednesday night, October 14, Kourtney Kardashian posted four new sizzling photos on Instagram. In the photos, the Poosh founder wore a black bikini. Kourtney went for a late-night swim. The barely-there bikini showed off her curves, including her famous derriere.

She simply captioned the post: “night swimmer.” Her post got over 1 million likes. One fan wrote that Kourtney’s post inspired them to go on a swim. Another fan wanted to know where she bought her swimsuit. The E! entertainer tagged supermodel Emily Ratajkowski’s swimsuit line Inamorata.

Most fans were in love with Kourtney’s photos. They left a series of fire and heart emojis. Others were just simply speechless of her incredible beach body. Some even claimed that she was the “Queen” of swimming.

This comes after Kourtney posted a duo of selfies. In the photos, Kourtney puckers her lips as she wears a gray sweatshirt and side buns. In the caption, she encouraged her fans to vote.

“OK @kerrywashington challenge accepted,” Kourtney wrote. “I am my own #votingsquad because I will be dropping off my ballot at an official dropbox but I do love discussing our thoughts on important voting topics on our group family chats, for the future of our country and for my children. I nominate all of my followers, get out there and VOTE!”

OK @kerrywashington challenge accepted. I am my own #votingsquad because I will be dropping off my ballot at an official drop box 💌😊 but I do love discussing our thoughts on important voting topics on our group family chats, for the future of our country and for my children. I nominate all my followers, get out there and VOTE !

Kourtney’s little sister, Kylie Jenner, already encouraged young voters. All she had to do was post a series of sizzling bikini photos. That led to an uptick in registrations on Vote.org. Maybe Kourtney’s late-night swim will give fans inspiration to vote, not just to swim.

The influencer may be swimming like it’s still summer. But she’s also embracing the fall. On Sunday, October 11, Kourtney Kardashian went for a run in New York. However, she wasn’t alone. Addison Rae joined her for their chilly autumn workout.

Kourtney wore a black long-sleeve Under Armour workout shirt with leggings and a Skims face mask. As for Addison, she wrote a half-zip jacket with biker shorts. She finished off the look with Puma RS-X3 sneakers, while Kourtney stuck to her go-to pair from Veja.

In the latest blog post on Poosh, Kourtney revealed what she has in her “workout basket,” which includes the stylish sneakers. No, it didn’t include her bikini.