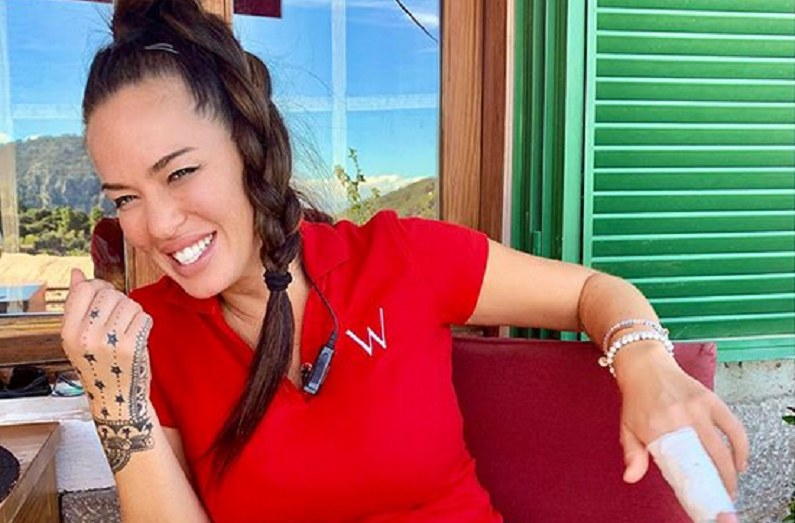 Below Deck Med star Jessica More spilled the tea about one of the charter guests. On Monday night’s season finale, the crew members were in for a shock when their former charter guests were in the same club as them. Most of them weren’t happy to see them. Others, like deckhand Robert Westergaard, were fine with it.

Rob was happy because he was flirting with one of them just hours before. Third stew Jessica was one of those unhappy crew members. She was already dealing with drama with her boat boyfriend. The two started arguing during the crew’s final dinner together.

Find out what Jessica has to say about those charter guests.

On Wednesday, October 14, Jessica More from Below Deck Mediterranean revealed that the crew knew that their last charter guests would be at the same club. One fan wanted to know if Rob invited the all-female group to the club on that night.

“If you’re not allowed to answer that’s fine, but we’re [sic] those guests at the club because Rob invited them?” the fan named Em asked. “Mighty suspicious that they showed up at the same club at the same time.”

“They were tipped off…” Jessica simply responded.

They were tipped off …

However, the crew looked shocked to see the charter guests there. Bosun Malia White said in her confessional that they just got rid of them and now they had to see them again. Rob immediately went to talk to the primary charter guest, Hannah Yu. Jessica didn’t like seeing them together. She even flicked the ash from her cigarette in their direction.

Jessica feels that Hannah disrespected her

The model wasn’t a fan of the Below Deck Med season finale. Jessica had a hard time watching the season back. She claims that Hannah tried to hook her up with guys even though she knew she was dating Rob at the time. Jessica had a feeling that Hannah wanted Rob all to herself.

“She was bringing guys to me and I was like, ‘I’m in a relationship with Rob,'” she revealed on the Below Deck Med After Show. “And then she went over there to get in his face.”

The sexy stew couldn’t believe what was happening. Obviously, Jessica’s heart was set on Rob, no matter how angry he made her. She didn’t like these charters, especially Hannah, who clearly wanted Rob. This comes after Hannah admitted that Rob was hitting on her during the charter season.

ICYMI: @Andy aired a sneak peek of the #BelowDeckMed reunion on #WWHL.

“I was absolutely devasted and hurt and disgusted,” Jessica continued. “This charter is probably my least favorite out of everybody.”

The reality star also noticed Rob and Hannah flirting during the charter. However, Rob claims that he was talking to Hannah about Jessica. However, Bravo didn’t show that. Instead, viewers witnessed Rob flirting with Hannah as he applied ointment to her elbow where she got stung by a jellyfish.

Part one of the two-part Below Deck Med reunion airs Monday, October 19 at 9 p.m. ET on Bravo.