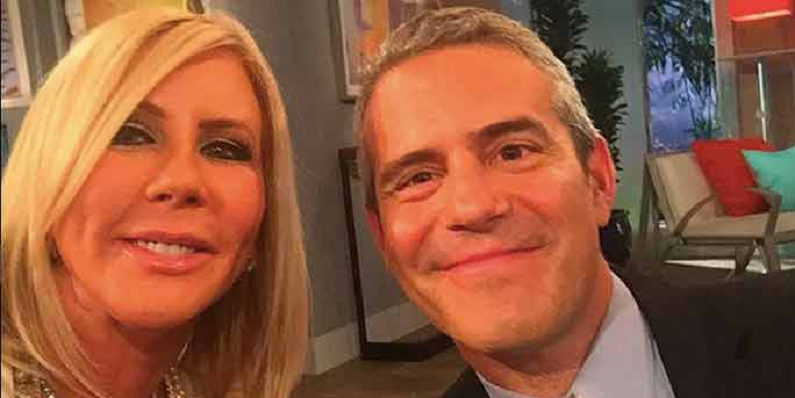 Andy Cohen made a nice gesture ahead of the RHOC Season 15 premiere. The Bravo executive producer sent flowers to Vicki Gunvalson. However, she’s not on this season. Earlier this year, Vicki announced her departure from the show.

She was the OG of the OC. She felt like “everyone else is just a copy,” like she famously said in her Season 10 tagline. Ultimately, Vicki left after 14 years on the show. Last night was the first premiere without Vicki in the episode.

So, Andy decided to surprise her with a beautiful gift. However, some fans think it was shady of him to do it.

Andy wanted to respect the fact that Vicki Gunvalson was a big part of The Real Housewives franchise. Andy surprised her with a bouquet arrangement. The lovely gift arrived at her home ahead of the RHOC Season 15 premiere. Vicki took to Instagram to share the gift with her followers.

The Bravo alum posted two photos of the flowers. It featured a colorful flower arrangement in a large vase. The card read, “There wouldn’t be an OC without Vicki G. Love, Andy.” Vicki was touched by Andy’s gesture.

“Thank you Andy for the incredible flower arrangement,” Vicki wrote in the caption. “After 14 incredible (and some not incredible) years on Bravo, it’s nice to be acknowledged on the launch of RHOC tonight.”

Thank you @bravoandy for the incredible flower arrangement. After 14 incredible (& some not so incredible) years on @bravotv , it’s nice to be acknowledged on the launch of RHOC tonight. #thankyou #gonebutnotforgotten❤️

But not everyone thought that Andy’s gesture was kind. They thought it had shady undertones. Over on Twitter, RHOC fans shared differing opinions. Bravo Queens reposted Vicki’s Instagram post. The tweet read; “On #RHOC S15 premiere, Andy sent Vicki G some flowers with a sweet message.”

Some fans think he could’ve chosen a better floral arrangement. “Those are ugly!” one fan wrote, to which another responded, “Thank you for saying it. I felt bad that I thought it!”

“Sorry…that arrangement is ugly and cold,” another added. “Perfect for Vicki,” responded another fan.

Meanwhile, some fans think production had a hand in the decision. Others think it was shady since Vicki is no longer on the show. Others think Andy regrets getting rid of Tamra and Vicki. They claim that Andy purposely chose an ugly bouquet out of pettiness.

Speaking of pettiness, Vicki doesn’t have high hopes for RHOC Season 15. In an interview with Celeb Magazine, she revealed that it’s going to be a “hot mess” without her. But she’s glad to no longer be on the show.

“You have Kelly Dodd mocking COVID and wearing hats that say ‘’Drunk Wives Matter,’ you have Boring Wind and her ‘modern marriage’ – whatever that means, you have the miscasting decisions that were Emily [Simpson] and Gina [Kirschenheiter], and you have wackadoo Shannon who really needs to check her ego and remember where she came from, where she started, and who was there for her all along,” Vicki said.

What are your thoughts? Do you think Andy’s gift to Vicki was shady? Do you think the flowers are pretty? Sound off below in the comments section.