Fans of reality TV shows such as OutDaughtered usually consider children to be off limits when being critical. Occasionally, however, you get a fan that forgets the children (such as the quints in this case) are just regular children. Adam Busby, however, is a fantastic father. And, he’s never afraid to clap back at a troll. And, this is especially true when it comes to defending his babies (or his wife for that matter).

We learned recently thanks to a post on his Instagram that Season 8 of OutDaughtered was currently being worked on. Unfortunately, we also learned there isn’t a premiere date to share just yet. Riri was first to participate in what Adam referred to as a “Quinterview.” Next, was Hazel! It, however, looks like Olivia wanted to get involved in the filming.

Adam Busby snapped a few photos of Hazel filming. One photo included Olivia rushing in and whispering into Hazel’s ear. Adam jested on Instagram Olivia was trying to feed her sister some lines. He, however, wasn’t sure Hazel was comfortable saying whatever Olivia was whispering in her sister’s ear!

One follower, unfortunately, read too much into what Adam Busby posted. “Reading lines? Why?” The individual penned. As you can see in the screenshots below, Adam Busby was quick to fire back at the OutDaughtered fan.

Critical fan gets reminded the quints are still children.

Based on Adam’s response, it is clear that even production doesn’t stop the fun and chaos from happening under the OutDaughtered roof.

Because she [Olivia] ran in the room while [Hazel] was answering questions and was trying to tell her something to say to the camera. They are kids and they try to be goofy. Especially Lulu.”

Unfortunately, Adam Busby suspected the fan forgot for a moment that these were just young children. Young children who enjoyed having a good time. 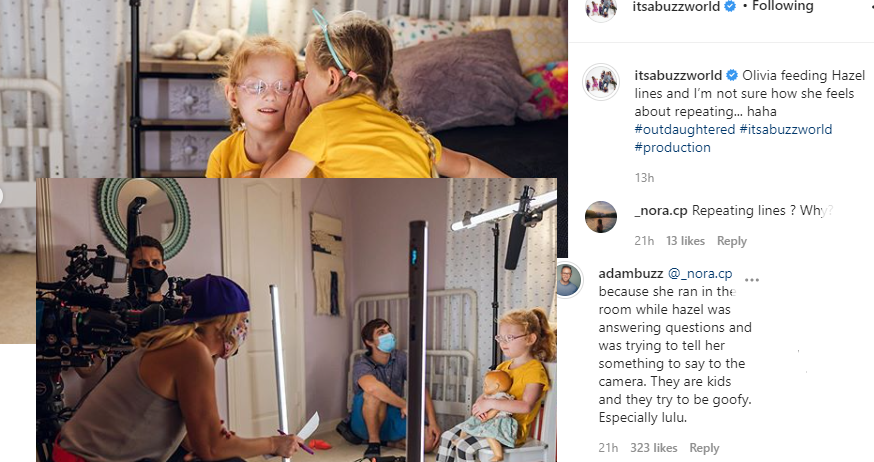 Now, over 300 OutDaughtered fans liked Adam’s response. So, it was clear he wasn’t the only one who thought commenting on Hazel repeating lines was a little strange.

Chances are pretty good the individual got concerned the show was scripted because of the caption. The individual, however, forgot these are just five little girls. (Six counting Blayke of course!)

Fortunately, Adam Busby is always pretty active on Instagram. He’s quick to clear up confusion. And, he’s quick to put negative trolls in their place.

So, do you sometimes forget these are just little kids? Are you excited OutDaughtered Season 8 is currently in production? Sound off in the comments!