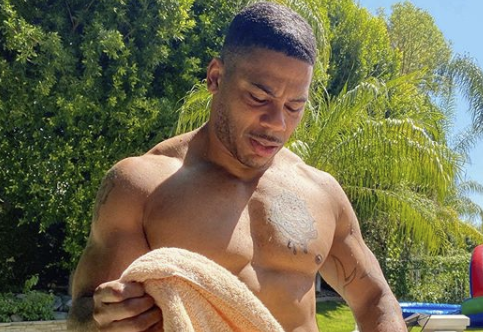 It’s hard not to love the Dancing With The Stars cast. They’re all incredibly talented individuals. However, Nelly recently revealed he used to have a crush on one of the core cast members. Can you guess who it is?

Nelly admits he loved In Living Color back in the day. Fans of the show probably remember the dancing group, “The Fly Girls.” One member was none other than one of our favorite judges, Carrie Ann Inaba.

“Carrie Ann better watch it. She’s an ex-Fly Girl!” Nelly told ET about his crush on The Fly Girls. “Her, J.Lo, everybody. All those In Living Color dancers were the best. I never told [them] that, I just admired from a distance.”

If you never had a chance to see the show, you’re really missing out. Fortunately, you can catch clips of The Fly Girls’ performances on YouTube. See one of their amazing performances here:

It seems that the rapper’s crush is all in good fun, though. Nelly is off the market. He and Shantel Jackson have been together since 2014. Nelly’s dance partner Daniella told ET that she believes Shantel makes him a better dancer.

“We FaceTimed her Sunday in rehearsal,” Daniella said. “And he danced for her like never before! I’m like, ‘Shantel, you need to be at all our rehearsals!'”

As for Carrie Ann, these days she is dating Fabien Viteri and the two seem very happy together. Carrie Ann often posts pictures of the two on her Instagram.

It’s Friyay 🙌🏻 time for road trip! ⛰ Daring to go beyond the backyard. 😬🏕 What are you up to this weekend? Have a beautiful weekend! #camping #covidthingstodo #wehavemasks @offroad_husky #husky

Before Fabien, Carrie Ann dated a few others. Many fans aren’t aware that she used to date her DWTS co-star, Artem Chigvintsev. The pair met on the set of So You Think You Can Dance when Artem competed back in Season 1. Carrie Ann was a choreographer. They dated from 2006 until 2009 before splitting up.

“As much as our relationship was really good,” Carrie Ann said at the time, they realized that neither “was ‘the one’ for the other. It was very sad to let go of something that was so good on so many levels.”

But, now, it seems that Artem and Carrie Ann are on good terms and there are no hard feelings. They appear to work well together on Dancing With The Stars and have moved on with their lives. Today Artem is engaged to WWE superstar Nikki Bella and they have an infant son together.

Since many fans don’t know about Carrie Ann and Artem, it may not be a stretch of the imagination to picture her and Nelly together.

After knowing all of this, will you ever look at Dancing With The Stars the same way? Catch Nelly, Artem, and Carrie Ann when they come back on Monday night. DWTS is on ABC at 8 PM eastern time. Don’t miss out!