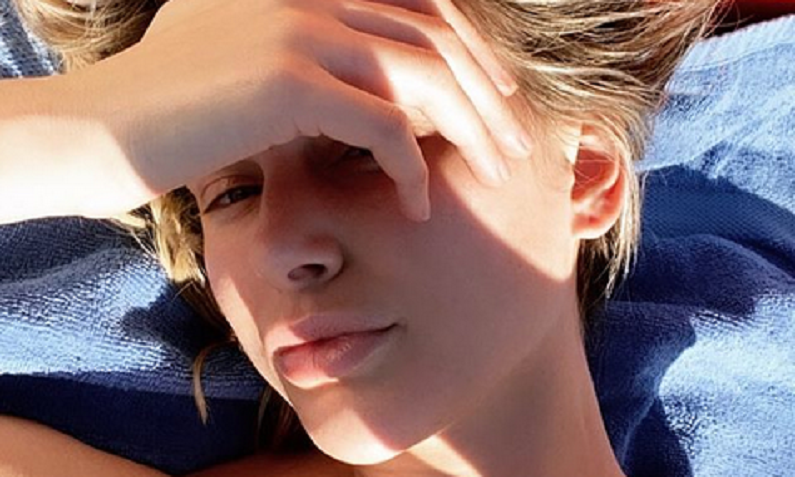 They don’t feel that she looks pregnant in any of her recent photos. But Lala is putting those rumors to rest. She just shared a nude photo on Instagram. The fully nude mirror selfie featured her ever-growing baby bump.

Lala Kent is comfortable in her body and it shows. She showed off her growing belly, just a month after announcing the baby news. On Tuesday, October 13, the 30-year-old Bravo personality shared a naked mirror selfie on her future baby’s Instagram page. In the photo, Lala poses in front of her walk-in closet.

She displayed her small baby bump in the side profile shot. The model also added heart emojis over her breasts. She also included the hit song “Bump, Bump, Bump” by B2K. Lala reposted the photo on her personal Instagram account, but with her body and face scribbled out.

Earlier this month, the Give Them Lala founder talked about her pregnancy symptoms. She shared a makeup-free selfie of herself with post-pregnancy breakouts. Lala wanted to show her followers how pregnancy hormones caused her skin to break out. The selfie shows a few pimples on her otherwise beautiful skin.

“I’m not sure why I’m posting this,” she wrote in the photo. “Since getting pregnant A LOT of things are changing…including my skin deciding to have a meltdown at the age of 30. F*CK YOUR HORMONES (Seth Rogan [sic] voice).”

Lala told her followers that “usually” she would feel “insecure” about her breakouts, but she decided to share the photo. It’s an honest portrayal of “real life,” adding “here it is. Ain’t she sexy.” However, Lala’s pregnancy breakouts aren’t uncommon, according to the American Pregnancy Association. Some women even have melasma on their cheeks, which is called the “mask of pregnancy.”

Lala Kent and Randall Emmett on their baby news

The Utah native and the Hollywood producer announced during a September episode of their joint podcast that they’re expecting their first child together. The 49-year-old Irishman producer shares two daughters, London and Rylee, with his ex-wife, Ambyr Childers. Later that month, the couple held a gender reveal party with many of their Vanderpump Rules cast members.

“I just assumed I’m having a boy,” Lala Kent previously told Us Weekly. “It was a bit of an adjustment. And then I saw my mom, and I just bawled because I get to have that. I get a little mini Lala.”

However, the couple had to put their wedding on hold due to the coronavirus pandemic. Lala and Randall were ready to wed in April 2020. They rescheduled it for September 2020 but decided on July 2021 instead. Lala said she looks forward to having her daughter attend their wedding.