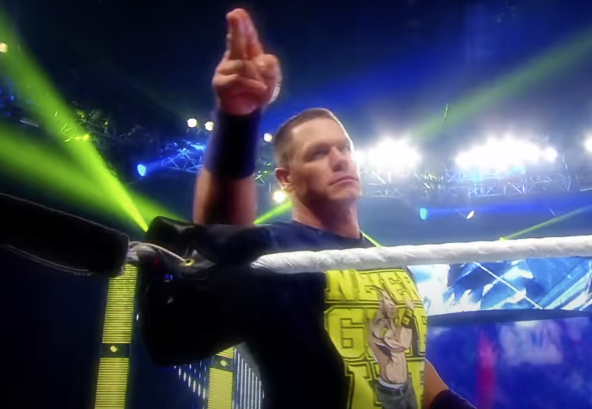 The WWE superstar finally tied the knot. After splitting from Nikki Bella in 2018, John Cena’s fans hoped he would find love again. He started dating Shay Shariatzadeh in 2019 and they married on October 12 in a private Florida ceremony. Fans are definitely excited for the happy couple, but the news is definitely a big surprise. Cena never made a formal announcement about the engagement.

John Cena And His New Wife Have An Adorable Love Story

John and Shay met while he filmed Playing With Fire in Vancouver. She accompanied him to the film premiere later that year.

“What’s truly special about this one is that, no matter what projects I’m involved in the future, this one will always have a special meaning because I got to film a special project and meet someone special,” John said to Entertainment Tonight at the time.

John turned 43 in April during the pandemic chaos and chose to spend a quiet birthday at home with Shay. An inside source told all this to HollywoodLife.

“John Cena is very happy and content on his 43rd birthday. His love life and career is on complete fire, he recently came off a well received match at WrestleMania and he is healthy in a world that is clearly in trying times,” the source continued.

Shay may be the better match for John Cena after all. However, before their relationship, John and his WWE co-star Nikki Bella were a hot item. The couple began dating in 2012. He proposed at WrestleMania 33 in 2017 and she happily accepted. Their wedding was supposed to be May 5, 2018, but Nikki broke things off just a month before.

“Overall, we did have such an incredible relationship, it was just two people that wanted two different lives,” Nikki said about their breakup. John Cena made it clear he does not want to be a father. He’s very focused on his career and worries that he would be an absentee parent. But Nikki always dreamed of having children.

They Parted Ways And Seem To Be Much Happier Now

John loved Nikki enough to give her a family anyway, but she worried he would grow to resent her because of it.

“Even in the end when he was willing to give me kids, I could just tell, it’s not what we wanted. And that’s really, like, you know, what pushed me in the end, was like, if I’m going to force someone to be a father…what if he looks at you down the road and just regrets everything, and then you have this child and you’ve built this life,” she said.

In the end, the two went their separate ways. Both seem much happier now. John has a new wife and Nikki has a son with her fiance, Dancing With The Stars pro Artem Chigvintsev. Nikki regularly posts Instagram photos of their happy little family.

John Cena’s Instagram account on the other hand… Well, you will just have to check it out for yourself.

Make sure to wish the happy couple your best! Follow TV Shows Ace on social media for more stories like this. We’ll be back with more stories shortly.