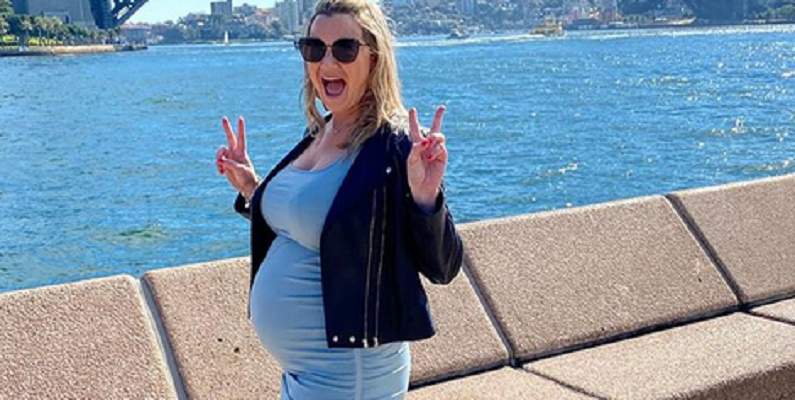 Below Deck Med Hannah Ferrier is due to give birth any day now. She’s now in the final stretch of her pregnancy. The former chief stew has been sharing her pregnancy journey on Instagram. Back in June, she announced that she’s having her first child with her boyfriend, Josh.

A few months later, the couple had a gender reveal. Hannah announced that she’s having a baby girl. Since then, she’s been sharing every aspect of her pregnancy. Now, she’s counting down the days and weeks until her daughter arrives into the world. The Aussie can’t wait to be a mom.

Hannah Ferrier is due to give birth soon

On Monday, October 12, the Below Deck Med alum took to Instagram to post an announcement. Hannah shared a black-and-white photo that showed her looking upwards at the camera. She held up her white T-shirt to show off her baby bump. Hannah had a big smile on her face as she shared a surprise announcement.

“Bubs has DROPPED,” Hannah wrote in the caption. “Any day now.”

Hannah’s baby is due sometime in October. However, she hasn’t shared the exact due date with her fans. But she still continues to share her pregnancy progression on her platform. From her announcement to her gender reveal and her baby shower to everything else in between, Hannah included everyone in her journey.

She also previously shared photos and videos from her pregnancy photoshoot. Some would say she looked like a “goddess” in those photos. Hannah was extremely happy when she learned that she and Josh were having a girl. She was overwhelmed with joy when her friends gave her a baby shower. Now, she’s looking forward to meeting her little bundle of joy.

Below Deck Med alum has been feeling emotional lately

Hannah took to Instagram Stories to share more of her progress. She’s been feeling very emotional lately, which is normal during pregnancy. The former Below Deck Med chief stewardess reposted her black-and-white photo with an important question. She wanted to know if any of her followers felt the same.

“What’s the craziest thing you cried about when pregnant??” Hannah wrote. She then added, “HELP! Need to feel better about being an emotional wreck.”

The Bravo star got plenty of responses to her question. She followed up with a video she shared on her Instagram Stories. In the clip, Hannah laid on her side as she revealed that she finally feels “normal.”

“Ok. You guys are amazing. You cry at weird stuff as well,” Hannah exclaimed. “Lots of crying at commercials and food. That’s good to know. I feel normal now. Thank you.”

She’s been enjoying her pregnancy after a rough first few months. In an interview with Bravo’s The Daily Dish, Hannah said she was sick for the first two months. For her, it felt more like morning sickness.

“It’s very strange because it’s not,” Hannah continued. “So not being able to control that and not being able to feel better, just my normal life was difficult. I’m feeling a lot better now. I think adjusting to your hormones and the world being in a pandemic at the same time is a little interesting.”

In September, Hannah shared her experiences with mood swings in an Instagram post. She said she couldn’t recall “the last time a day passed without spontaneously bursting into tears of joy!” Even with the highs and lows, Hannah can’t wait to give birth. She’s even talked about her desire to become a mom on Season 5 of Below Deck Mediterranean.