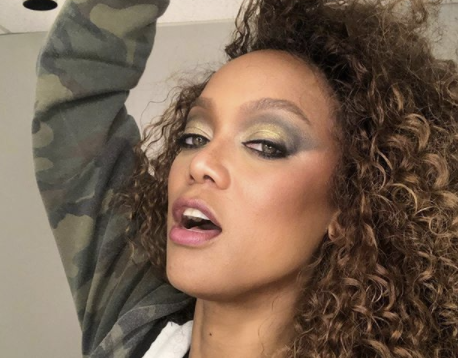 If you’ve been following Dancing With The Stars this season, you probably noticed fans are a little loud about their opinions regarding Tyra Banks. In each episode, Tyra goes through a few costume changes. Viewers think it’s annoying, but Tyra doesn’t care.

“What good does that do, participating in that? I don’t think there’s anything really positive from that,” she said regarding her refusal to engage with haters. “We’re not gonna let that get us down. We’re gonna keep changing clothes; people want it.”

Whether you love her or hate her, fans have to admit that Tyra’s spirit is unyielding. Ever since DWTS execs announced she would take over as host, viewers tried to tear her down. Many said they wouldn’t even give her a chance. And yet she is still here.

Tyra Claps Back At The Haters

She seemed to troll the haters a little bit on Instagram last night. She posted a photo of an outfit of a previous week with the caption: “The dancers and stars really bring it week to week, and I love bringing the fashion! Tonight’s @dancingabc theme is 80s night, and I’m not changing outfits twice. I’m changing 3 times. Oh yeah. Yo, it’s gone be mad dope! TONIGHT on ABC at 8/7c. Where are you tuning in from?”

The dancers and stars really bring it week to week, and I love bringing the fashion! Tonight’s @dancingabc theme is 80s night, and I’m not changing outfits twice. I’m changing 3 times. Oh yeah. Yo, it’s gone be mad dope! TONIGHT on ABC at 8/7c. Where are you tuning in from?

Even before the season began, some viewers expressed hostility. They said they were not willing to even give Tyra Banks a chance. The elimination incident in week 4 only fueled their fire.

During the episode, Tyra accidentally announced Val and Monica would return next week. Unfortunately, a few moments later she called them back. They were actually in the bottom two. The hostess realized the information on her cue cards didn’t match what the control room was telling her. Viewers quickly began attacking her online.

“In the end, the ending was correct. However, the journey was bumpy, based on some technical stuff,” Tyra told USA Today after the incident. “But the world doesn’t see that. The world sees only me.”

She went on to point out there is a whole team of computers and technical advisors that sometimes make mistakes too. “They don’t hear the chaos in my ear and how I have to manage it and smooth it out,” she said.

Others Come To The New Hostess’s Defense

DWTS judge Bruno Tonioli and executive producer Andrew Llinares quickly came to Tyra’s defense and confirmed that a behind the scenes error was to blame.

“I think we were a little shocked and stunned by what was going on, but this is live TV and you have to deal with situations like this all the time,” Llinares told ET. “There was a technical issue as the actual votes were coming in last night. What happened was, Tyra actually had the wrong names on her card.”

“It’s live television, things like this happen, especially with information coming in from all over the country, voting and calculating in such a small amount of time,” said Tonioli. “Tyra was brilliant … she was really good because she took control of the situation.”

While viewers look for any excuse to blame Tyra Banks, she remains determined to rise above the situation. Tune in next week to see what fun costumes she will bring to the stage next week.

Follow TV Shows Ace on social media. We’ll be here to bring you all the latest celebrity and entertainment news.

Danielle Busby Ignores Health Issues
Grandma Foxy From ‘Unpolished’ Celebrates Her Birthday And Product Line
Claire Spivey Married – Reality Sets In For Mom Hilary
Carlin Bates Has Good News About Layla’s Health After Feeling ‘Helpless’
One Original Member of ‘The Real World’ Won’t Be Living At Loft – Why Not?