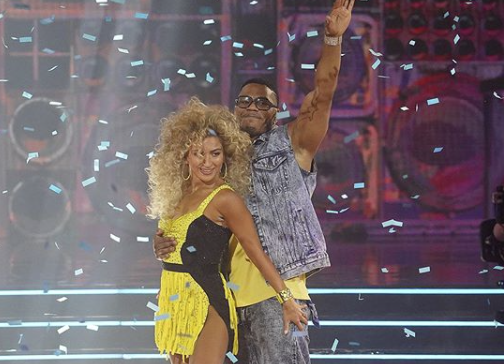 It was a night of personal bests on Dancing With The Stars last night. Nelly is one celebrity contestant who consistently manages to improve week by week. During last night’s episode, he and his partner Daniella Karagach pulled off a fantastic routine. The judges declared how pleased they were with his progress and each gave the couple an 8 for a total of 24 points. This is the highest score the rapper received thus far.

“You can’t stop the swivel!!! We have a permanent smile on our face after #TeamDaNelly’s Samba. 😍 #DWTS #80sNight,” the official DWTS Instagram account posted.

“LOVED IT! My favorite dance of the night!” one viewer chimed in. The comments were filled with praise. Many actually felt that Nelly deserved higher scores. Perhaps next week he will come back and earn his 9s.

You can’t stop the swivel!!! We have a permanent smile on our face after #TeamDaNelly’s Samba. 😍 #DWTS #80sNight

Nelly Improved A Lot Since Week 1 And It Shows

In previous Instagram stories, Daniella said she loves working with Nelly. She says that each week, he comes back stronger than ever and always tries his best. And apparently, he never takes breaks. Daniella said during an Instagram live Q&A session this week that if their rehearsal is five hours long, Nelly will be on the floor giving it his all for the entire five hours.

Earlier in the season, Nelly criticized the judges for being so harsh with him.

“They’re whack, whack, whack. They’re hating,” Nelly told Us Weekly at the time. “I feel like the judgment should come with understanding! You’re judging me. I’m from the hood in St. Louis, Missouri. There are no ballrooms. I’ve never danced, choreographed in my life and you’re judging me like I should know these things and I just picked up this choreography in five days.”

It’s possible that the judges lightened up. However, Nelly definitely shows improvement week after week. Many believe that he’s actually earning his higher scores.

Daniella said in an Instagram live that she once taught him an entirely new style in just eight hours. She’s really excited to teach him ballroom and thinks he will pull it off well. Fans can’t wait to see what they will bring to the table next week.

If you didn’t get a chance to watch his routine last night, you can do that here:

If you don’t already follow Nelly and Daniella on Instagram, you should do that right away. The two are always posting fun behind the scene videos. It’s clear the two have a connection, and their bond makes them stronger.

Do you want to keep Nelly and Daniella in the competition? Make sure you vote! Viewers decide the bottom two dancers, so make sure to keep voting week after week.

Dancing With The Stars returns Monday night at 8 PM on ABC. Will you be watching?