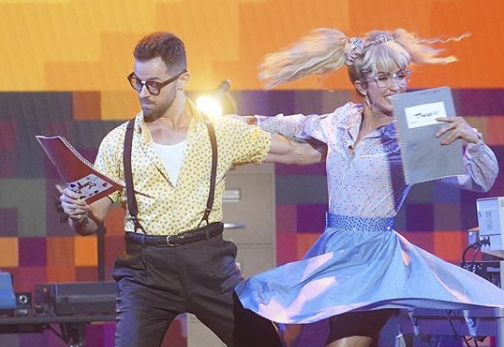 Team #WillYouAcceptThisDance pulled off another fabulous routine last night! Kaitlyn Bristowe and Artem Chigvintsev are unstoppable and defended their first-place title for another week.

Kaitlyn And Artem Bring Their Best To The Dance Floor

Dressed as nerds, the couple performed the Tango to Tiffany’s “I Think You’re Alone Now.” But it wasn’t your typical Tango. At the end of the routine, Kaitlyn threw in some awesome breakdancing moves.

“I know the judges wanted to see a different side, so ’80s Kaitlyn is out to play,” the former Bachelorette star told ET. The judges loved it and sang her praises.

“That really was an action-packed ’80s blockbuster!” said judge Bruno Tonioli. “That made me happy! Thank you!”

They earned 27 total points for their performance, securing their spot at the top of the leaderboard for another week. They have 117 total points across the five weeks and an average score of 23.4.

If you didn’t have a chance to watch their routine yet, you can do that here:

Artem confirmed Kaitlyn actually taught him a few things about 80s dance. The pros may choreograph the main routine, but it’s always great when the celebrity contestants add their own fun flair.

If you follow the Dancing With The Stars Instagram page, you possibly saw Kaitlyn and Artem engaged in a dance battle earlier this week. It’s clear the two always have a great time, even behind the scenes.

If you love Kaitlyn Bristowe and Artem Chigvintsev, make sure to vote. The bottom two couples are decided by the viewers, so let your voice be heard.

Other Dancing With The Stars Contestants Score Well

Kaitlyn and Artem had a personal best with their score of 27 last night, but they weren’t the only ones. Olympic figure skater Johnny Weir and his partner Britt almost pulled off the first perfect score of the season. They scored 29 out of 30 points. It would have been perfect if Bruno Toniloi hadn’t given them a 9.

Rapper Nelly and his partner Daniella also had a personal best with 24 points. Their Samba was full of energy. Fans and judges alike thought it was fantastic.

In earlier weeks, Nelly and Johnny both criticized the judges for their harsh standards. Do you think the judges lightened up, or are contestants performing better?

Unfortunately, each week one couple must leave the competition. Last night, we lost Jesse Metcalfe and Sharna. Their Tango left them tied for the bottom of the leaderboard, and the judges ultimately chose to save Peta and Vernon Davis instead.

Dancing With The Stars will be back next Monday at 8 PM on ABC. Make sure to tune in and see who scores well and who goes home. Remember that your votes help keep contestants in the competition. So who are you voting for? Let us know in the comments.