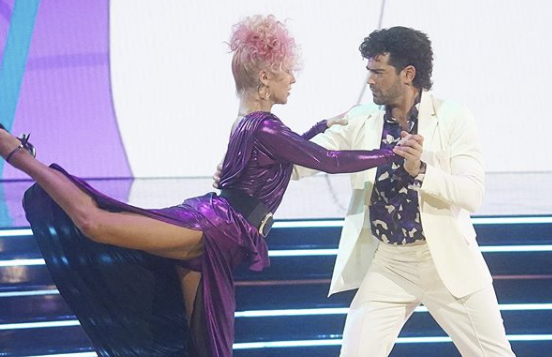 Were you shocked by that elimination last night? Jesse Metcalfe’s fans certainly were. They really feel that the Desperate Housewives actor got a bad deal — and the song choice was partially to blame.

Although Jesse and his partner Sharna Burgess have hovered in the middle of the pack, they continued to improve week by week. Last night, they were in the bottom two along with Vernon Davis and Peta Murgatroyd. The judges unanimously chose to save Vernon and Peta.

Jesse and Sharna tangoed to “Everybody Wants to Rule the World” by Tears for Fears. The 1985 song has an iconic sound. Fans quickly noticed the song played on Dancing With The Stars last night definitely wasn’t the original. They used a reworked version to fit the routine, but it wasn’t great.

Fans sounded off in the comments section on the official DWTS Instagram page. Practically everyone agreed that it was a bizarre song choice for the Tango. Do you agree?

We were sad to see #TeamAllIn go last night! Everyone show @realjessemetcalfe and @sharnaburgess some love one last time. 💜 #DWTS

“He did great, judges were overly hard on him,” wrote one Instagram user.

“The judges are still mad about her and Bobby Bones winning two seasons ago,” another quipped.

If you didn’t see them perform last night, you can see it here:

The Couple Definitely Had Chemistry

Practically everyone was sad to see Jesse and Sharna leave. They really believed the couple had a lot of chemistry and could potentially see a romance budding between the two. After all, pro dancer Artem Chigvintsev met Nikki Bella while they were competing back in Season 25.

According to Jesse, DWTS offered him a spot on the show three different times before he accepted the offer. He didn’t have any previous dance experience and was worried fans would look down on him. Although his time on the show was short, he hopefully made some lasting memories while competing.

So What’s Next For The Couple?

If you’re going to miss Jesse on DWTS, don’t worry. You can catch him an upcoming Hallmark movie. Will you be watching Ships In The Night: A Martha’s Vineyard Mystery?

Sharna will probably still hang around the DWTS set for a while. Eliminated contestants Emma Slater, Pasha Pashkov, and Keo Motsepe have been spotted in the viewing gallery.

Check out Dancing With The Stars next Monday night at 8 PM on ABC. Who do you think will go home next and who will take home the Mirrorball Trophy? Let us know what you think in the comments.

If you liked this story, be sure to follow TV Shows Ace on social media. We have all the latest Dancing With The Stars news to keep you informed. Check back soon for more exciting stories!