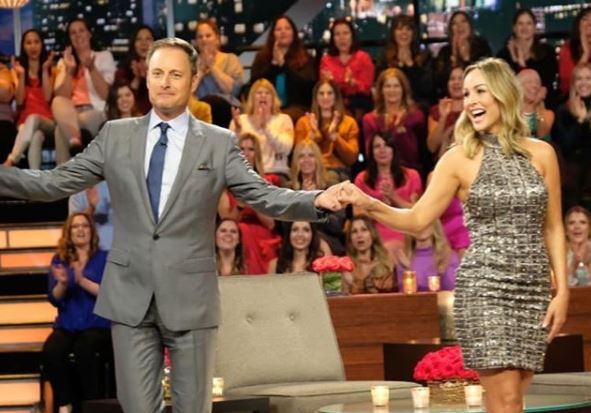 Tonight at the end of The Bachelorette 2020 fans saw someone stepping out of a limo. It was a huge mystery and now fans want to know who it is getting out of the limo. TV Shows Ace has a pretty good theory on who it is.

Who shows up on The Bachelorette?

On The Bachelorette, there is always a mystery. Well, who shows up in the limo is not one of those. More than likely this is going to be Tayshia Adams. If you are wondering why she would show up, that is because spoilers say that Clare Crawley found love and went on home. If they are correct, Clare won’t even finish her season.

REEL IT IN, We got a new episode of ClickBait up, Tell a friend 💁🏽‍♀️

This is where Tayshia Adams comes in. ABC has decided to bring her in to replace Clare when she leaves. That will give her a chance to find love, too. How it is all going to work nobody knows, though.

The spoilers are already out for when Tayshia Adams takes over as The Bachelorette. Reality Steve was able to figure out her final four plus more. One thing is that there are only 16 guys left when Tayshia shows up. These guys are Chasen Nick, Joe Park, Ivan Hall, Blake Moynes, Ed Waisbrot, Demar Jackson, Brendan Morais, Kenny Braasch, Jason Foster, Tyler Cottrill, Ben Smith, Jay Smith, Eazy, Zac Clark, Riley Christian and Bennett Jordan. It is a great group of guys left.

A few other guys were brought in that never met Clare. That gave Tayshia Adams a few guys to choose from as The Bachelorette.

Here is what Reality Steve had to say about her final four:

“I say almost positive because things were done so differently this season. I’m hearing guys outside of final 4 had family/friends brought into the bubble to meet Tayshia, but I’ve been unable to confirm that. I don’t know if we have a traditional final 4 where, once you’re down to 4, that’s where they meet family, then once we’re down to 3, it’s overnight dates, then when it’s down to 2, they meet Tayshia’s family, etc. Maybe that did happen, maybe it didn’t. I think those are her four based on what sources gave to me, timing of when I received it, and where it came from.”

Don’t miss new episodes of The Bachelorette with Clare Crawley on Tuesday nights on ABC. Monday nights is still Dancing With the Stars right now.