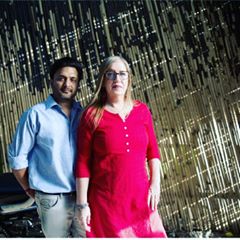 90 Day Fiance: The Other Way star Sumit has not always agreed with his parents, especially when it comes to his girlfriend Jenny. Despite this, he believes they want what’s best for him.

Sumit’s parents do love him

Sumit still loves his parents and knows they love him. 90 Day Fiancé: The Other Way star Sumit Singh defended his parents on Instagram after the three of them got into a heated argument about his romance with the much older Jenny Slatten on the TLC  spinoff.

Sumit pleaded with his mother and father to accept his relationship with Jenny. The couple is struggling to give their blessing because of the couple’s 29 year age gap.

His mother stated in a heated moment that she would never accept Jenny as her daughter in law. Sumit’s father wasn’t accepting of the relationship either. “The age of Jenny is, I think, more than double your age. According to Anil, “Within the Indian society, these things are not acceptable.”

Sumit’s thoughts on his parents

“Love is the absence of judgment,” the season 2 star wrote on social media after the drama aired on television. Fans responded with love and respect for the couple and one fan writes about how his parents seem like “such nice people” that “truly” love their son.

“At the end of the day, it’s your choice,” the fan added. “You can have Jenny’s love and your parents’ love too. They won’t turn their back on you. They’re kind people.” Sumit agreed with that statement and said “Yes, they are very nice people and they love me too.”

Sumit’s first marriage was arranged by his mom. She thought that the two would be good together. That, however, wasn’t the case. Ssadly, the two parted ways.

Anil took some responsibility for the “mistake” and said it pained him to see his son suffering. However, he was trying to make amends and is fronting the $20,000 amount needed to finalize Sumit’s divorce from his first wife.

Jenny and Sumit want to make it work

Anil said he and Sahna would “try their best” to be open to their son’s relationship. But, the couple still has many obstacles to overcome. Jenny relocated from Palm Springs, California, to India to be with Sumit. She could only stay with him if only they got married, according to People.com. Jenny’s visa could be up before Sumit’s divorce is issued. The couple would be unable to marry before Jenny would have to return to the United States.

Sumit and Jenny have both made it clear that no matter what happens, the two want to stay together and make it work.

Fans will have to tune in to 90 Day Fiance: The Other Way to see how if they stay together.