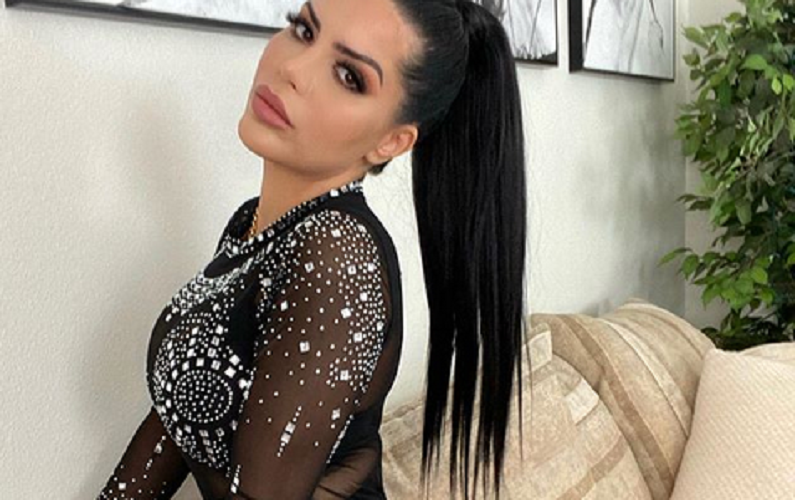 Larissa Lima is known for her appearance on 90 Day Fiance. So, she still has a lot of the TLC fans on her Instagram account. Most of them got a rude awakening when they saw her latest post. They didn’t know what to expect, but it sure wasn’t her booty.

These days, Larissa is making her money through CamSoda and OnlyFans. Since the network fired her, she has to make a living somehow. It’s a good thing that Larissa already had both accounts ready. While she usually shares photos of herself in lingerie, it’s her latest post that has people talking.

Larissa Lima simply wanted to post a photo of her hike. On Monday, October 12, the 90 Day Fiance alum posed on a hiking trail in just a sports bra, a gray g-string thong, and white sneakers. She suggestively pulled down her shorts to her thighs, revealing her butt. Larissa looks back at the camera and smiles, indicating the “cheekiness” of the photo.

“If you like happy trails follow me up the mountain!” Larissa wrote in the caption. “Link in bio!”

The link is to her OnlyFans platform. 90 Day Fiance fans have a lot to say about Larissa’s latest post. Most of them are disgusted to see her bum in full view. One user told her to “keep it classy.”

Another asked what the “point” of the post was. “Just curious what was the point of this?” the user asked. “No hate just curious lol.”

“Nice to see you doing big things with your life,” another fan said.

Gym time, what are you doing on this sunny Monday? 🙏🏻

One fan was shocked to see Larissa’s behind. “Larissa your pants!” they said. Meanwhile, another fan had a sudden urge to go on a hike. “This makes me want to go walk a trail,” they joked. Another Instagram follower suggested that Larissa should “check for ticks” in her behind.

However, one fan said they were “ready to unfollow” the reality star. “Foul. Ready to unfollow. Keep it classy!” they added. Some fans just wanted to know why Larissa posted this photo in the first place. Others claim she got “paid” to post it. Obviously, it was a clever photo she used to promote her OnlyFans account.

The former 90 Day Fiance star is always posting sexy photos on Instagram. So, seeing Larissa’s behind shouldn’t surprise fans. She last showed her backside when she wore a black lace teddy. Larissa previously flaunted her booty when she wore a red lace bra with a matching cheeky pair of underwear.

I'm still in the recovery process of my tummy tuck and fat transfer. Many people wrongfully believe that plastic surgery will fix all the areas that troubled them permanently. The truth is, you have to work out regularly to maintain the results of any body work. My current gym routine is cardio, consisting of doing stairs and treadmill. Once I am at my 9 weeks post Op, I will be able to do a full body workout, along with cardio. So, when you see in my stories that I'm working out "after all these plastic surgeries", know it is because I am maintaining the amazing work of @smithplasticsurgery

Fans can’t also forget the time she posted a series of steamy bikini photos. In each of the posts, Larissa wore a hot pink bikini. In one of the photos, she turned to the camera as she showed off her backside. Of course, these photos didn’t show as much of her behind as her latest photo.

Larissa responded to those shocked 90 Day Fiance fans. She took to her Instagram Stories to post a series of clips. In the clips, Larissa stands in front of her latest Instagram post. She mocked her fans and their shock over seeing her “butteee.” She also addressed the backlash she got for showing off her new manicure.

What are your thoughts on Larissa’s booty photo? Do you think it was too much? Sound off below in the comments section.