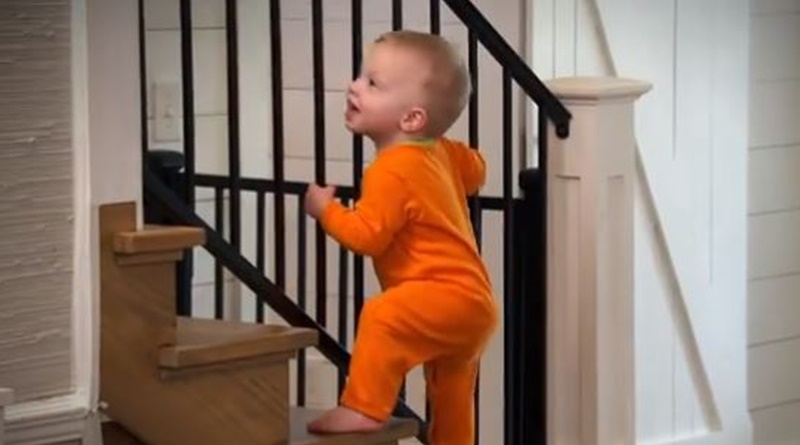 Sweet Home Sextuplets often gets declared as “adorable.” But, for many TLC fans, it all seems very stressful. And, as the babies start becoming more mobile, Baby Blu really courts danger fans think. In fact, he seems like the wild child of the Waldrop kids. At least, until he meets up with a horse. Then, he’s not so confident.

We reported that in the Christmas episode, oats and glitter got scattered all over the house. The usual chaos erupted in the family as the sextuplets prepared cereal that helps Santa’s reindeer fly. It looked rather wild and chaotic. But, fans come to expect that from the family. Now, a new sneak peek dropped for Tuesday, and fans hear the Waldrops yelling “Blu” rather a lot. The little boy gets into everything! And it looks very dangerous at times.

Climbing on railings, getting on top of the counter, making a mess, and generally being a wild child makes many fans exclaim. Actually, they really fear this little guy could hurt himself or others. Many of them reacted to the new teaser for the show that dropped on Instagram. One follower wrote, “OMG that kid on the counter!..so dangerous. Love the family but, hopefully, no ER incidents!” And, Sweet Home Sextuplets fan wrote, “Oh man so dangerous!!”

Blu feeds a baby goat! But he isn't so sure about the mini horse…. watch an adorable new episode of #SweetHomeSextuplets Tuesdays at 10/9c.

Blu meets a horse, not so sure

When it comes to bullying his siblings and behaving like Tarzan around the home, Blu’s all out there. Terrorizing his sister with scissors and a hair hack’s a lot easier than dealing with a bigger animal. Part of the sneak peek revealed that Blu met a baby goat, and he picked it up. And, that bit looked cute and charming. Plus, he held a bottle of milk. But, when a horse came out of the stables, he backed off. Looking rather unsure. Suddenly, Baby Blu looked less confident.

The horse probably looked big to Blu, but actually, it’s a miniature. Just for once, Blu actually looked thoughtful. It looks like the Waldrop wild child’s capable of realizing the potential danger of bigger animals. His dad Eric doesn’t seem too keen on horses either. So, maybe that’s where Blu gets the vibe from. But, fans think it’s a pity that he can’t slow down a bit in the home. After all, it seems the Sweet Home Sextuplets child courts danger a lot.

This is the look of “Blu just cut my hair!!!!!”😩😩😩😩 Never a dull moment in this house…Especially when you have a Blu Boy!!🙈💙🙈 Also side note….don’t ask how he found the scissors…We have them put up and hid. But when you are a climbing monkey and you are Blu you can get your hands on anything!!🙈 Of course I put her hair in a bag and labeled it…so yet again one day I’ll look back and maybe laugh..if I live that long😝 #mybrothercutmyhair #breathe #iwillsurvive #thistoshallpass #itsamemory

One of nine kids

Blu’s just one of nine children in the Waldrop family. The septuplets also live with their older brothers. And, in the current season, fans see them staying in the trailer home while renovations take place. Cramped, it takes a lot of patience dealing with so many kids. And, Blu’s in the terrible twos.

What do you think about Blu climbing on countertops and playing with scissors? Sound off in the comments below.