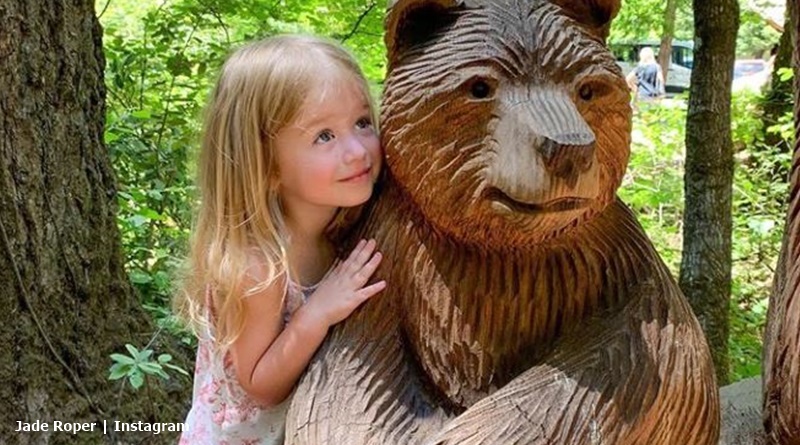 Jade Roper and Tanner Tolbert took the kids out to a pumpkin patch event this weekend. Emmy grows old enough to thoroughly enjoy that sort of thing. And, Jade said that their daughter “had the time of her life.” Plus, Brooks enjoyed looking at the pumpkins and climbing on the haystacks.

Jade Roper and Tanner give Emmy the treat of her life

Emmy and Brooks grow more adorable by the day, fans agree. We reported that the Bachelor in Paradise alum shared some gorgeous clips of the kids loving each other recently. Now, Jade expects their third baby, and she looks forward to that. But, Emmy suddenly outgrew being a toddler. And, Brooks takes an interest in things he previously ignored as a baby. Fans love that they bond so well.

Braving a day on her feet, pregnant mom Jade said in her Instagram Stories that she suffered swollen feet after their day out. But, it looks like Emmy enjoyed the day so much that her parents felt happy for her. Jade took plenty of photos and videos of her daughter enjoying herself. Of course, the first stop involved admiring rows of giant pumpkins. Emmy rode the carousel and called her horse “Pinkie.” Plus, they went for a hayride and posed for silly pictures.

Bachelor in Paradise and other reality TV shows garner fans from all over the world. Thanks to streaming TV, people from Europe, Australia, Africa, and practically everywhere see their favorite US shows. Social media platforms mean that people from other countries share in their favorite stars’ lives. This obsession with the pumpkin season often perplexes fans who don’t live in the USA.

Of course, people go crazy about pumpkins every year stateside. Simmerwinds Nursery explains that “Historically, European immigrants established the beginnings of pumpkin mania. With the simple recipe of cleaning out the insides and baking the pumpkin with milk, honey and spices, the first pumpkin pie was born.” And, the settlers carved the pumpkins “to ward off evil spirits.” The traditions in Fall continue to this day. So, people like Jade Roper make sure their kids enjoy the festivities.

Reality TV reveals culture from all over the world

While many people think reality TV’s shallow and drama-filled nonsense, it actually helps teach about different cultures. The TLC 90 Day Fiance franchise pairs up people from across the world. So, Americans learn about places like Nigeria, Tunisia, Ukraine, and more.  Some countries screen their own versions of American shows like Bachelor, Idol, Survivor, and more. So, when they’re out of season, worldwide fans tune in and watch the USA originals.

That explains why Jade Roper often receives greeting from fans all over the world. No doubt, many of them also loved seeing Emmy enjoying the pumpkin season celebration this year.