Chase Chrisley and his new girlfriend Emmy Medders have Instagram in a bit of a frenzy. He took to his account recently to share a snapshot of himself and his gorgeous girlfriend. And, she shared the same photo on her own account. And, it really got those who follow the Chrisley family talking.

Chrisley Knows Best fans have a lot to say about Emmy Medders.

The fans of Chase Chrisley’s family are very opinionated. They had a lot to say when Savannah and Nic broke up. And, now they have a lot to say about Emmy Medders. Now, some Chrisley Knows Best fans think everyone needs to back up and give the couple some space. But, others are quick to point out you give up your right to privacy when you step into the reality TV life.

Now, we’ve already reported that some fans think Emmy Medders looks a lot like Jessica Simpson. And, this isn’t intended to be an insult. Jessica Simpson is stunning. (And, so is Emmy). Perhaps the more interesting comparison, however, is those saying Emmy Medders looks like Chase’s mother. Again, the comparison wasn’t intended to be an insult. Fans love Julie.

Moreover, many believe it is extremely common for a man to seek out a woman that reminds him of his mother. So, the comparison to Julie has people thinking Emmy Medders could finally be “the one” for Chase.

Followers of Chase Chrisley begin to shift through his girlfriend’s profile.

Emmy Medders has gained several hundred followers on Instagram just today. And, considering her romantic link to a reality TV star… This Instagram follower climb isn’t too surprising. Unfortunately, she may be getting some attention she doesn’t really want. Chrisley Knows Best fans are not only starting to follow her, but they are going through her profile. They are scrolling through her pictures. And, they are leaving comments.

Fortunately, it doesn’t seem like too many trolls have landed on her profile yet. But, it is still possible she wasn’t ready or this kind of attention.

There is one comment on a few different Instagram posts that seems to keep coming up. What is it exactly? Well, some fans think Emmy Medders and Chase Chrisley would make beautiful babies together. And, truthfully, they probably aren’t wrong. After all, Chase is a very handsome individual. And, fans all agree that Emmy is a beauty.

Appearance wise, Chase and Emmy share a lot of the same qualities. So, that is yet another reason why fans seem to think their babies would be adorable. Now, the duo have only been together for a few months. So, chances are pretty good they are not discussing babies just yet. But, fans can still dream about it! 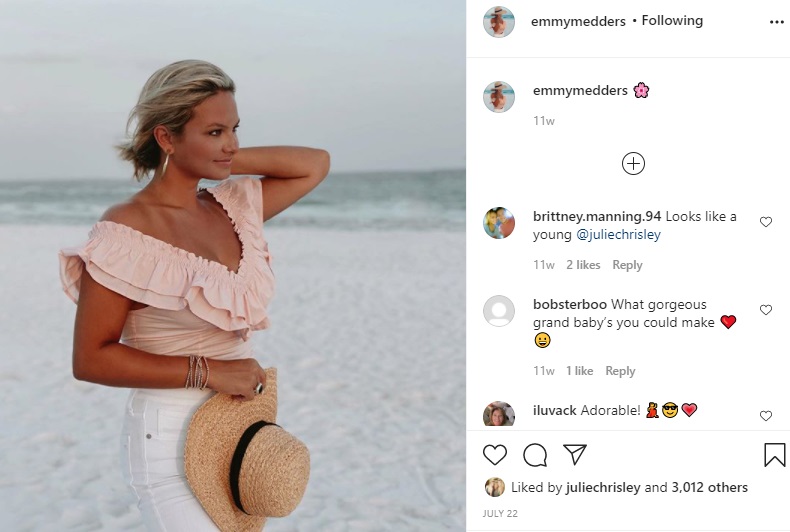 Sound off in the comments if you think Chase Chrisley and Emmy Medders would have adorable children together.

Jennifer Aniston Reveals She Is Not Attending The Emmys This Year And Why
Lori Loughlin, Husband Splash Out On Multi-Million Dollar Abode
Kendall Jenner On Her Hands And Knees At Met Gala
Ready To Ride Into The Sunset With Hallmark’s ‘Taking The Reins’?
Lisa Rinna Struggled To Support Amelia Hamlin And Scott Disick