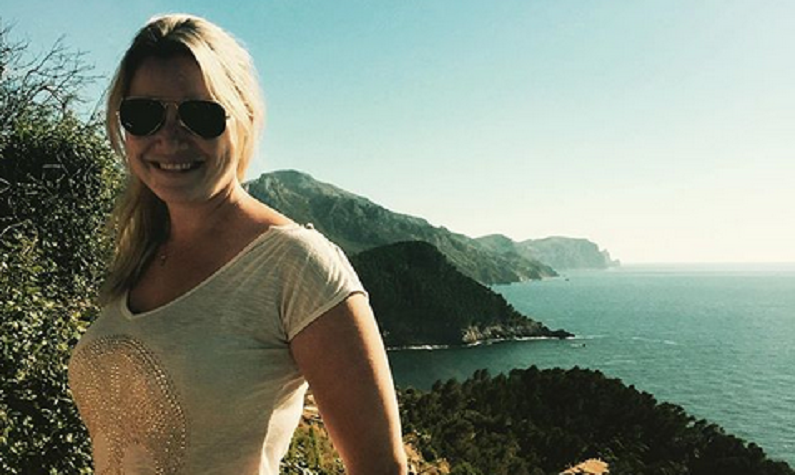 Below Deck Med alum Hannah Ferrier shared her day with Us Weekly. Though she’s been fired from her chief stew position, she’s just as busy as ever. Hannah hasn’t let her pregnancy slow her down. The Bravo star has two new business ventures.

She also starts her days very early. Probably because she wants to get used to waking up at odd times of the day. Previously, Hannah shared her jaw-dropping photos from her maternity shoot. Now, she’s revealing what she does most of her days.

The former chief stew is just as busy as she was on board of the Wellington.

Hannah Ferrier shares a day in her life

The former Below Deck Med star recently spoke to Us Weekly. She shared her daily routine with the magazine outlet. While her yachting days are over, the 33-year-old is preparing for the birth of her first child. Back in June, Hannah announced that she’s having a daughter with longtime boyfriend Josh. She is due sometime this month.

Regardless, Hannah is keeping busy. She’s working up to her due date. According to the outlet, she launched two new projects – her Ocean International Training Academy and her new podcast called “Dear Diary, You’re Effed!” The first is an online course for those who are interested in starting their career in yachting. In the latter, Hannah reads her diary entries and pokes fun at her pre-teen self.

“It’s not like work because [I] laugh the whole time,” she told Us Weekly.

🚨 🐬CALLING ALL OCEAN LOVERS🐬 🚨 I have some exciting news!! @oceaninttrainingacademy just launched our Early Bird Special! If you have signed up with the link in bio then check your email because this offer is not going to last long! Get an exclusive first chance to buy our Online Superyacht Training Course made by @nastiasurmava and yours truly. If you are serious about getting into yachting then this is your chance! See you on the water 💦⚓️

Hannah rises at 7 a.m. She kicks off her busy day with a walk along the beach with her dog, Bonnie. “Even after all these years, water still calms me!” the television personality said. Then, at 8 a.m. she gets ready to shoot a video for her new business. By 10:30, Hannah tries on her uniform for her yachting program, which she says “doesn’t fit the same!”

The rest of the day is filled with work and whatnot. By 6 p.m., Hannah records an episode of her podcast with fellow Aussie and best friend Justin Hill. The former yachtie tries to go to bed by 11:00 p.m. She only uses all-natural products in her skincare regimen. “I’m actually loving them,” Hannah added.

Does the Below Deck Med alum have any regrets?

Hannah Ferrier’s firing on Season 5 of Below Deck Mediterranean came as a shock to fans. After bosun Malia White discovered that Hannah had undeclared Valium and a CBD pen onboard, she reported her to Captain Sandy Yawn. Prior to that event, the two ladies argued over rooming arrangements. Malia wanted her then-boyfriend, Chef Tom Checketts, to bunk with her.

Since then, Hannah has expressed her regret. In August, she told E! News that if she could go back in time, she would do things differently. This time has given Hannah to reflect back on the situation. The Below Deck Med alum even admitted her mistake.

“If I could do it all over again, I would’ve just declared them as soon as I came on board,” she explained. “It was definitely not something that was intentional. I wasn’t trying to hide anything.”

Hey lovelies!!! Tomorrow is the launch of my podcast – Dear Diary You’re Effed. I started this podcast as a way to keep in touch with you guys now that I’m home and ‘knocked up’ 😜 When I was moving house a few months ago I stumbled across my old diaries from when I was a teenager and couldn’t believe my eyes! I was the same but worse!! 🤣🤣 So join me and my lovely friend Justin Hill who’s a red carpet reporter in Sydney @jus_hill and get ready for a laugh a minute!! Subscribe now at Apple Podcast or Spotify and follow @hannahspodcast for updates and behind the scenes footage 💗💗💗

She has no intention to speak to Captain Sandy or Malia White ever again. If she could go back further in time, she would have quit after Season 4. She would have rather left Below Deck Med on a high note. Hannah is much happier these days and it shows.

TLC’s First Look At ‘My Feet Are Killing Me’ Leaves Viewers Disturbed
‘Sister Wives’: Kody Brown’s Bedtime Schedule Shrivels Up In Flagstaff?
‘Bachelorette:’ Zac Clark Shows Tayshia Adams Sober Life Is Fun
Is There A ‘My Big Fat Fabulous Life’ & ‘My 600-lb Life’ Crossover In The Works?
What Did Graham Bunn Say About His Relationship With Chrishell Stause?