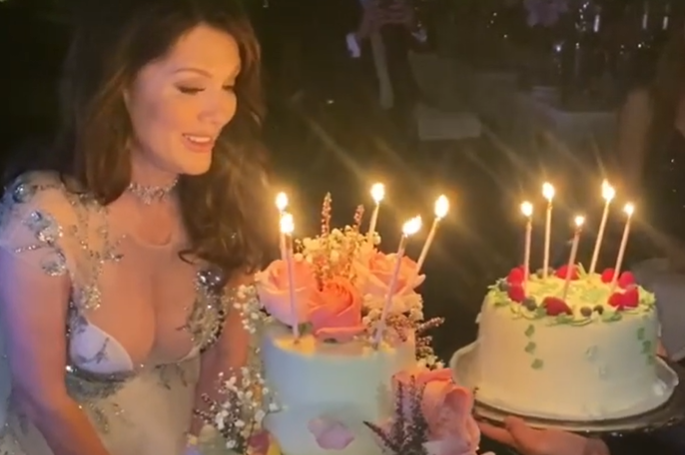 Ken Todd, the husband of Lisa Vanderpump, has come under fire recently with a lawsuit revolving around their restaurant, Villa Blanca. According to court documents, the company in charge of the building, Golden Triangle Building LLC, is suing their investment company and Ken for more than eighty thousand dollars.

Recently the couple had to close their restaurants due to COVID-19 and talked about how they hoped they could open again soon. While they were able to reopen SUR with social distancing, Villa Blanca has remained shuttered. Lisa released a statement about the closing saying, “While saying goodbye to the location where we have actively served the Beverly Hills community for 12 years and employed hundreds of Angelenos, is a sad time for us.” She went on to say maybe they could bring it back at a different location.

Why Is Lisa’s Husband Being Sued?

The lawsuit says that Lisa Vanderpump and her husband owe money for the lease. Being in Ken Todd’s name, his is the only one that appears on the lawsuit. According to The Blast, the documents says the plaintiff doesn’t have any plans to terminate the lease. It also says the defendants, “refused to make all the payments of Rent due under the lease.”

The landlord is suing because they claim the business isn’t complying with applicable Covid-19 ordinances. The suit says that Ken and Lisa said they terminated the lease and paid a forty thousand dollar security deposit. The lawsuit said there is no record of the deposit. Additionally, it also said the plaintiffs don’t have the right to terminate the lease and still need to pay rent.

When announcing they would be closing, Lisa said, “if the landlord had been willing to renegotiate and the lease wasn’t ending, we would have reopened, but unfortunately with Coronavirus, the situation was beyond our control.”

Oh my god I just found this gorgeous little pink and white striped beach set by @businessandpleasure_co – spent the day enjoying my new find! Drove to the beach and it feels so special 💕

Fans Really Want To See Lisa Vanderpump Back On RHOBH

Lisa Vanderpump can do no wrong in the eyes of her fans. On her Instagram talking about her latest podcast, her fans were begging for her return to RHOBH.

One said, “So wish you’d come back and give RHOBH some spark!”

Another said, “Wish they wound just pay her crazy money and get her back! Are you listening Lisa??? Andy???”

Yet another fan said, “Goddess wins again. Teddi- gone. Erika- going. Rinna and Kyle are not as untouchable as they think. The Fans voice is being heard.”

It seems Lisa is happy where she is for now, with one reality show on the way and a podcast. A Vanderpump Dogs spin-off is in the works with Peacock streaming.

As for her businesses, Lisa said, “We will definitely be opening up the other restaurants as soon as the government allows it and they are safe to open.”

Fans will stay tuned for new developments in the lawsuit and their remaining restaurants Pump and Tom Tom.