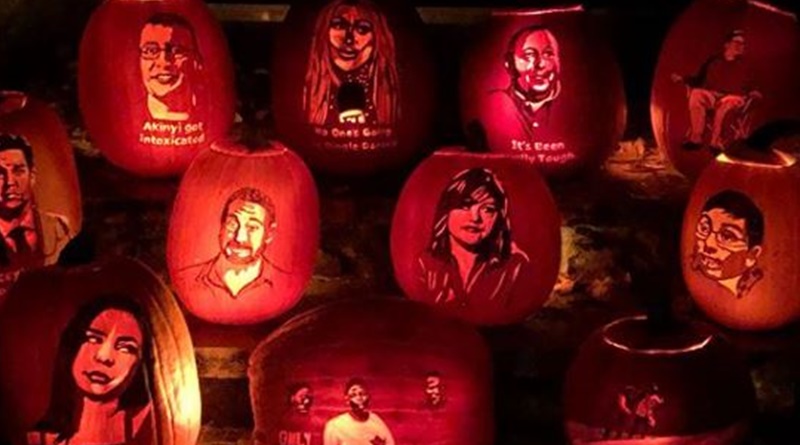 Pumpkin Season’s upon us and everyone carves their own. Or, they buy lanterns and hang them up. But some people who love the season also love watching TLC’s 90 Day Fiance. So, a world where pumpkins meet cast probably appeals to many fans. If you love the season and the show, then you’ll love this artistic Instagrammer.

Lately, Colt Johnson took a lot of heat from fans about the way he treated Jess. Well, and Larissa. But fans loved it when Jess turned the tables on him and Debbie. The mommy’s boy got a shock at the Tell-All when Jess revealed she married someone hunky. This week, a pumpkin carver created a cutout lantern of Colt in his speedo. Fans loved it, as it’s so very talented, and amusing.

Pumpkin Carver Katya’s profile says, “Love of 90 Day Fiance and the art of pumpkin carving to create magic.” And, yes, fans agree they create magic. On the Colt carving post, she wrote, “Is it Fabio? Is it Jason Mamoa? Nope, it’s our boy Colt! Now, no shame, because he is literally my 2021 beach bod goals for real right now. Gotta give it up for a rubenesque man in a speedo on the beaches of Brazil, he certainly put it all out there. ”

Is it Fabio? Is it Jason Mamoa? Nope, it’s our boy Colt! Now, no shame, because he is literally my 2021 beach bod goals for real right now. Gotta give it up for a rubenesque man in a speedo on the beaches of Brazil, he certainly put it all out there. @savagecoltj #90dayfiancepumpkins #90dayfiance

Commenting on the carving of Colt, one fan wrote, “I about died 😂😂😂😂.”  In the post, Katya also revealed the original picture that she took the carving from. And, the likeness seems remarkable. Most people struggle with a smiley face, after all. One of her fans noted, “Oh my god. This is the best one yet!!! 🤣😂🤣😂😂.” But, another person felt a bit disturbed, They joked. “the best/most disturbing pumpkin ever 😂 I love it haha.”

Katya’s 90 Day Fiance Pumpkins account reveals tons of historical displays and carvings. In October last year, a photo revealed 11 of them set out on the stairs. In that post, one picture showed them during the day and one at night. They all glowed in the night shot. Clearly recognizable, you can pick out TLC stars like Tom Brooks, and Akinyi’s guy Benjamin.

Happy Halloween! The day has finally arrived, and I’ll be unveiling my last pumpkin carving of the year later today. Wishing all of you a magically spooky day, filled with hilarious costumes, obscene amounts of candy and maybe even some cool pumpkin carvings of your own 🧡🎃🍁🍂🌾🍫🍭🕸🦇🧡

In another Instagram account, Katya runs carving competitions. @pcpumpkincarving reveals, “9th Annual People’s Choice Pumpkin Carving Competition – Sunday, October 18th, 2020 🎃🔪.” Some amazing talent shows up there as well. So, if you think you can capture your favorite star, then go for it. But for many of us, talent just doesn’t stretch that far.

Actually, @90dayfiancegossip reminded fans that this talented 90 Day Fiance Instagrammer exists. They shared the same photo of the Colt carving and told fans about the Page. The caption read, “This lady is back again this year with more talented pumpkin carving! Make sure you’re following her!!” For some fans, this post brought the first occasion fans saw see it. And, some funny comments resulted.

Do you love pumpkin season and 90 Day Fiance? What do you think of this Instagrammer’s talent? Sound off in the comments below.