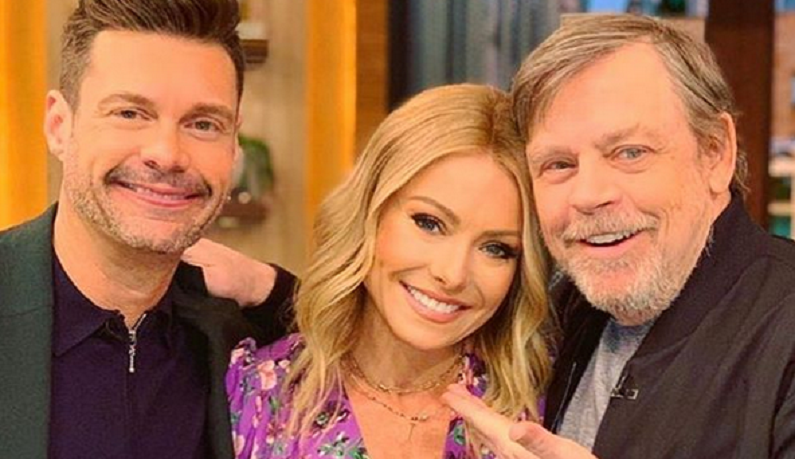 It could be the end of an era. Kelly Ripa shared her thoughts on leaving Live With Kelly and Ryan. The 50-year-old feels like she’s at a crossroads in her life. There may be a day when she steps away from the morning talk show. She talked candidly about her goals and hopes for the future.

Kelly assumed that she would have retired by now. So, fans shouldn’t be surprised if she decides to pull the plug on the show. While she loves what she does, her true passion is behind the scenes. Kelly wants to take a step back from the spotlight.

Kelly Ripa reveals she would leave the show

In a new interview with Parade, the mom-of-three made a confession. At one point, she would leave the show. Kelly Ripa hosted ABC’s syndicated talk show since 2001. She took Kathie Lee’s place when the late Regis Philbin was still host.

“I’ve been writing a lot,” Kelly said. “So my goal ultimately would be to eventually get off camera and start working behind the camera more in that creative aspect because I really do enjoy the writing process so much.”

Her co-host, Ryan Seacrest, is the reason why she hasn’t left. He’s also one of her longtime friends in the business. Their work relationship is so great that it doesn’t feel like work. The two have known each other for twenty years, and he’s the reason why Kelly shows up to work every day.

When she does step away from the show, the former All My Children actress said that additional time will be spent on her three children – Michael, 23, Lola, 19, and Joaquin, 17. Kelly says seeing her children start their respective lives and careers is “very exciting.”

“I’m focused on the next chapter of my life, but I’m really excited on what they’re doing first,” she explained. “Put them first and then I’ll line up behind them.”

She celebrated her 50th birthday

A week prior, Kelly Ripa celebrated her 50th birthday with a special show. She received a video message from former daytime queen Oprah Winfrey. In the message, she joked that Kelly should keep her clothes on to not embarrass her daughter Lola. As TV Shows Ace previously reported, Lola got her payback.

The actress also has something else to celebrate. Kelly and her husband Marke Consuelos quit drinking to contribute to their “healthy lifestyle.”

“We did both quit drinking almost three years ago,” Kelly told Parade magazine. “Now that we were sitting around drinking day and night, but I think that there is something about like clean living – maybe that’s what did it. Maybe that’s the difference.”

I’m not gonna lie. The mrs. And I got into some freaky shizzzzz this weekend 👀🤸🏼‍♂️🤼‍♀️🧘🏽‍♂️🧘🏼‍♀️🥨#itsbetterinthebahamas #anniversaryweekend

The couple often talks about their healthy lifestyle. Kelly previously shared her diet with Harper’s Bazaar’s YouTube series Food Diaries: Bite Size. She revealed that she loves to work out every day of the week. Sometimes she works out with her hot husband.