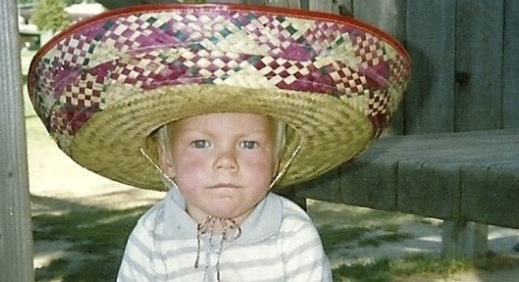 Dancing With The Stars 80s Night is only a few days away! Are you excited? The show’s official Instagram page is sharing pictures throughout the week to stoke excitement. In addition to the usual fun behind the scenes antics, the show has also had some throwback posts. First we saw Bruno Tonioli’s 80s shots. Now, we have Derek Hough’s baby pictures

If you haven’t seen them yet, you can look here. Wasn’t he adorable?

“He literally looks the same! With added facial hair! 😂😍” said one fan. There is still one day left before the big night. Who knows whose 80s photos they will reveal next?

DWTS Has More To Share Than Derek’s Throwback Photos

The throwback photos are nice, but we really can’t get enough of the crazy outfits in the behind the scenes photos. They’ve been unveiling the contestants’ costumes one at a time. Who do you think would win best dressed? Val and Monica definitely managed to capture the 80s vibe, don’t you think?

Our love for #TeamValdama could never be tainted! 💖 Comment your favorite 80s song below. #DWTS #80sNight

If you haven’t seen a complete list of routines and song choices, you can take a look at that here. Monica and Val will be doing the Tango to “Tainted Love” by Soft Cell. They seem to be having a lot of fun practicing lifts in the rehearsal room, but if they better not bring any lifts on the floor. Lifts definitely aren’t allowed in the Tango, and Carrie Ann will definitely have something to say about that.

While Monica and Val work on their moves, Peta is causing quite the stir with her own ensemble. We recently covered that, in case you’re interested.

So When Can We Expect The Newest Judge To Perform?

Judge Derek Hough already confirmed he plans to perform his own routine this season. Even if he isn’t competing for the Mirrorball Trophy, fans would love to see him show off his moves.

DWTS hostess Tyra Banks actually recently said she would also like to perform. However, she’s not an experienced dancer. On a recent episode of The Kelly Clarkson Show, she admitted she hoped Derek could show her a thing or two. During Derek’s time as a professional dancer, he won first place six times. That’s more than anyone else.

Would you like to see Tyra Banks and Derek Hough dance together? Let us know. Don’t forget to stick around for 80s night! We will have plenty to talk about after the show. Follow TV Shows Ace on social media for more exciting content just like this.

‘Below Deck’ Fans Had A Lot To Say About Elizabeth’s Reunion Look
‘The Blended Bunch’: Erica Shemwell’s Brother Quinn Fires Back At Criticism
‘Sister Wives’ Star Meri Brown Gets Love From Her Daughter
Megan Fox Denies Post Claiming She Doesn’t Wear Masks Was Hers
‘Loki’ Coming to Disney Plus in June 2021