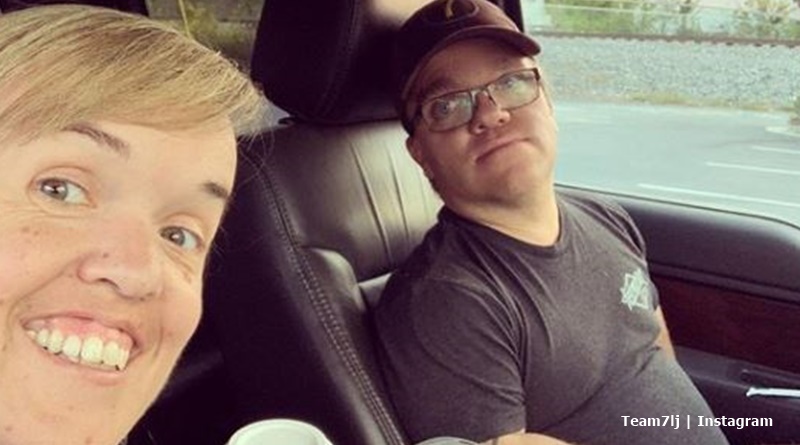 7 Little Johnstons fans know that dad Trent’s a little person. But, he makes up for that with wide shoulders and a strong upper body. He and his wife Amber both dieted recently, and they lost a lot of weight. Actually, Trent’s looking really good right now. But, some fans discovered he’s got a rather long organ. In fact, they think it’s unusually large.

We reported that Amber went on a diet. She shared all about it for information, and not as a promo. The TLC star chose the Optavia Works diet. And, she mentioned a few times that she lost a lot of weight And, Trent also shed the pounds. She shared a comparison before and after collage of herself. But, in recent pictures, it’s really obvious that Trent looks good as well.

It seems their diet doesn’t rule out a cup of coffee, so the 7 Little Johnstons couple, went for a “coffee date.” On their Instagram, the couple posted up a few shots.  The caption read, “Can I get just 1 good coffee date selfie??” In the first photo, Amber smiled at the camera. Meanwhile, next to her, Trent made a gesture with his hands. It’s the kind that guys use to describe the exaggerated size of the fish that got away.

The second photo really, notably, and truly got the attention of fans. In that photo, Trent played around and leaned towards Amber. His tongue stuck out. And, yeah, really stuck out. Blown away fans couldn’t get over it. And, in case you were thinking about an organ in his pants, you were wrong. Did you know that a tongue’s an organ? Cureus.com describes it as “an organ that has an autocrine/paracrine mechanism of action to synthesize different substances to interact with the whole body.”

Naturally, humans also use that organ affectionately when getting intimate. Like French kisses and more. So, one 7 Little Johnstons fan wrote, “Jesus thats one long tongue 👅 😳 😅.” And, another  one wrote, “MAN BOY YOU GOT ONE HECK OF A TONGUE!!!😳👍.” Then, a fan commented, “Oh…. Trent …. lucky wife!!” This fan said it for the folk at the back. ” Damn, who knew Trent got them long anaconda don’t want none unless you got buns hun tongue 👅! Sheezhhh 😂”

Can I get just 1 good coffee date selfie?? #notpossible #myeverydayreality

Fans love that Amber and Trent joke around together

While plenty of fans said things about Trent’s amazing tongue, others commented on how they joke around. Fans of 7 Little Johnstons like it that this long-married couple still enjoys being together. One fan said, “OMG you guys are adorable!!!! Your humor and love for one another is priceless!!”

What do you think about Trent’s large organ? Do you think it’s pretty amazing? Sound off in the comments below.