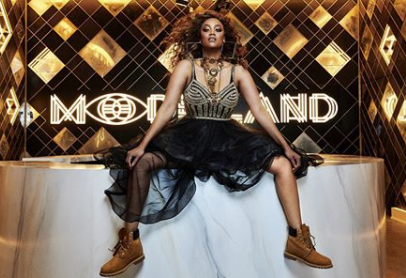 As talented as Tyra Banks is, she may not be able to do it all. The Dancing With The Stars hostess admitted on The Kelly Clarkson Show that dancing isn’t her strongest skill. She hopes the newest judge Derek Hough may be able to teach her a thing or two.

“I feel like I do have the moves as long as someone choreographs me and tells me exactly how to dance,” Tyra told Kelly. “But Derek Hough is the new judge this season on Dancing with the Stars and I’m kinda tempted to ask him to choreograph, like, 16 counts for me to see if I could do it.”

If Anyone Can Teach Tyra Banks To Dance, It’s Derek Hough

Kelly and Tyra went on to discuss how talented Derek is. During his time as a pro on Dancing With The Stars, he won a whopping six Mirrorball Trophies, the most of any other professional dancer.

Tyra may be right to worry. Derek Hough has a reputation for being a harsh critic, but he says it’s because he wants to make the dancers even better.

“I had no intention to be tough or anything like that, but I guess what I realize, for me, is that I think I just have a lot of respect,” Derek told Us Weekly. “I have a lot of respect for these celebrities and what they’re doing and I genuinely want to give them some feedback. ‘Cause I know for me when I was a pro, I wanted actual feedback. I want to learn how to be better. So that’s what I’ve always wanted to do.”

We previously reported that Derek Hough does plan to grace the stage at some point during the competition this season. Could Tyra Banks be his dance partner?

Dancing With The Stars Prepares For 80s Night

Fans are getting excited for next week’s episode. The theme will be 80s night, and some contestants are already teasing their routines. Kaitlyn Bristowe and Artem Chigvintsev currently top the leader board and promised their routine would be upbeat this week.

We're taking it old school on Monday! What's your favorite trend from the 80s? #DWTS #80sNight

With such little notice, it’s probably safe to say Derek and Tyra won’t have anything planned this week. But there’s still plenty of time left to choreograph a routine for a future episode.

Do you want to see Derek Hough and Tyra Banks show off their skills on the dance floor? Be sure to let us know what you think. Dancing With The Stars returns on Monday night at 8 PM. Be sure to tune in!