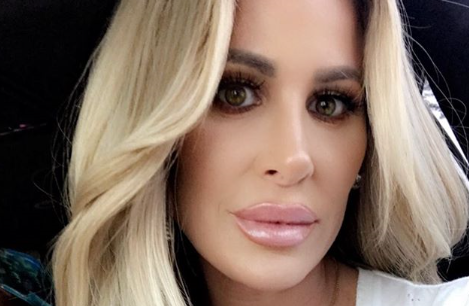 Kim Zolciak Biermann hasn’t discounted going back to RHOA ever. With the premiere of Don’t Be Tardy last night finding the family in a different setting, she’s been doing the press circuit. Kim and her family are traveling the country in a small RV. This had made the new season so far very entertaining.

Being out again of course, brings up the question if she would return to RHOA. On E News she said that she wouldn’t return as a full time main cast member. She stared on the show from season one through five. She said she would prefer they do a show where they find out where the cast of Season 1 is now.

How Would Kim Zolciak Biermann Return To RHOA?

Kim Zolciak Biermann said, “I think, and this has just come to my mind over the last couple months, that the first season, all of us — Shereé, Nene and I were friends before this ever started for years.”  Kim said she felt they were all a lot of fun and bringing them back together would be great.

But when asked if she would go back, she said, “for who? No. Sheree’s not there. NeNe’s not there. Like, no.” The reality mama has no plans to say bye to her reality way of life if it’s up to her.

When speaking to ET Online, Kim Zolciak Biermann said she had no plans anytime to leave television. She does not plan to pull her family’s series like the Kardashians have done. She said jokingly, “they have a lot more money than I do.” She also said that her kids, “love the cameras.”

Brielle said, “I said, if we get to Season 10, I think that would be really cool to say we’ve done 10. But if not, or whatever the case may be, I think we’re all OK with,” if they don’t continue after this season.

Feel so blessed to go through life with you @kroybiermann ❤️

Would NeNe Go Back To The Show?

Nene said overtime she was being shown in less and less episodes. Something didn’t seem fair to her when she was seeing how much time her other co-stars were getting. Kim would do something with her OG Atlanta girls, but not the current cast of RHOA. Don’t Be Tardy airs on Tuesdays, on Bravo.

Lifetime’s ‘Dangerous Medicine’ Is Part of LMN’s Wicked Revenge
‘My 600-lb Life’ Update On Tara Taylor: Where Is She Now?
‘Yellowstone’ Father Figures On And Off The Series
Will There Be A New Episode Of ‘Shameless’ This Week?
Who Might Jeremiah Duggar Be Courting?