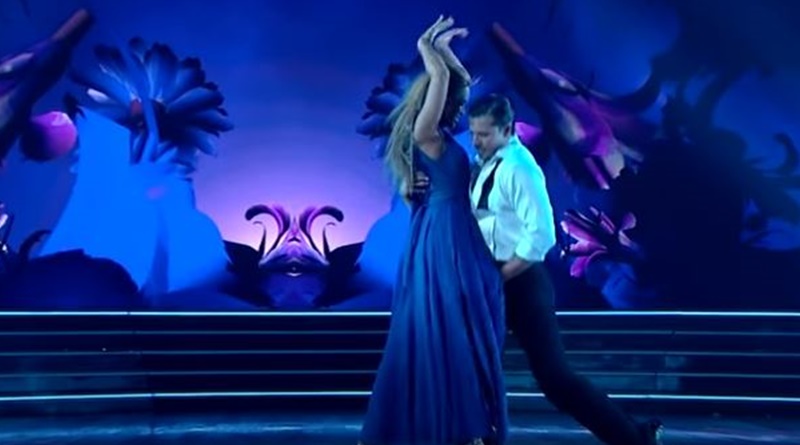 DWTS contestant Chrishell Stause and Justin Hartley split very publically. And the word is out that she might be dating again. But right now, it looks like things don’t go all that well between her and Gleb Savchenko. However, he made nice and gave her a bunch of flowers.

Fans adore Chrishell, especially after her performance on Monday. Seamless and beautiful to watch, obviously she put in a lot of hard work. But, behind the scenes, it looks like some conflict arose between the two dancers. The Dancing with the Stars fan-favourite shared about how he made up and made nice after a fight. Chrishell shared a photo of herself with a bunch of flowers.

Possibly, the fight came during rehearsals because you wouldn’t suspect anything wrong on Monday. As ET reported, her dance to “Adore You” by Harry Styles everyone watching at home all the feels. The outlet noted, “From the dance duo’s chemistry to the persistent smiles and passionate choreography, #TeamSellingIt definitely turned up the romance this week.”

Taking to her Instagram on Wednesday, Chrishell wrote, “Ok full disclosure, @glebsavchenkoofficial and I had our first fight-ha!” Then, the Dancing with the Stars contestant said, “if apologies look like THIS, I guess it’s not so bad!! 🥰💕 ” Well, it seems that she’s a bit at odds with his “strict Russian nature.” So, she explained that she tries “softening him up with…southern charm.”

It seems that they care very deeply about their performances. And, she says the DWTS Pro brings a lot of “passion.” Probably, they worked it all out between them as she concluded with, “finding the balance landed us here and I truly think this could be our best week yet.” Well, hopefully, that’s the case as tension could translate into the dance.

Plenty of fans reacted to the post which revealed just about enough roses for the entire Bachelor Nation. One fan teased saying, “I bet his wifey will look for an even bigger arrangement the next time they get in a fight LOL 😂 #sosweet.” And, another one commented, “Try being married to a Russian🤣 I had to also do some softening, but eventually he came around lol.”

Ok full disclosure, @glebsavchenkoofficial and I had our first fight-ha! If apologies look like THIS, I guess it’s not so bad!! 🥰💕 We both care so much and I love the passion he brings to what he does. We are working on me picking up some of his strict Russian nature, and I am softening him up with a little southern charm. Finding the balance landed us here and I truly think this could be our best week yet 🤞🏼🤞🏼🤞🏼🤞🏼 #TeamSellingIt #DWTS

Meanwhile, other DWTS fans think maybe his wife suggested he send flowers. But, fans agree that if Gleb looked for a good way to say sorry, he hit the right note. As one person noted, “This is what apologies look like! Haha.”

Despite the clash, which looks settled now, Chrishell’s fans agree she dances really well. And, they anticipate more top-notch dances from them in the next episode.

What do you think of that giant bunch of flowers? Sound off in the comments below.