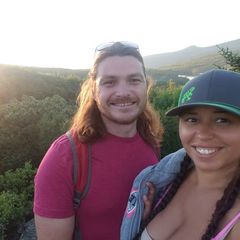 90 Day Fiancé stars Tania Maduro and Syngin Colchester’s marriage is rocky. But, the pair put all worry aside for a birthday celebration at the beach!

Is the couple still together?

Tania and Syngin started their relationship after meeting on a trip to Syngin’s native country, South Africa. Tania chose to stay in the country with him and lived there for a few months before moving to the United States. The two got married a short time later.  When asked about their love, Syngin confirmed they weren’t ready to throw in the towel on their marriage just yet according to In Touch “If I really didn’t think this was a match, I would have separated,” Tania said.

The couple has been together two and a half years already and has been going to marriage counseling to see if they can work out their problems. She revealed they would “re-evaluate” their relationship if their dynamic didn’t start improving.

During the 90 Day Fiance Tell-All, the host asked if the coronavirus lockdown had any impact on their relationship. Syngin went on to say it did because “being in the house 24/7” made them bicker often. Tania also discussed the issues about Syngin’s drinking and said it bothered her. Syngin pointed out he was responsible and held down a job.

However, Tania was quick to point out that Syngin just started the job so, his working wasn’t a good indication of his issues.  Syngin said in South African culture, they “drink a lot” and he would ultimately not give up drinking to save his marriage. “I enjoy a cold beer,” he added. This shocked many viewers and many speculated that the marriage wouldn’t last. Some people were shocked that the two were still together.

Tania and Syngin are still working it out

The couple recently took a trip to Virginia beach and posted a few ocean photos. “Fun-filled time with friends and my love,” she captioned a picture of them on Virginia Beach on October 7.  It shows that the two are still going strong and enjoying their time together. Fans continue to watch as their marriage evolves.