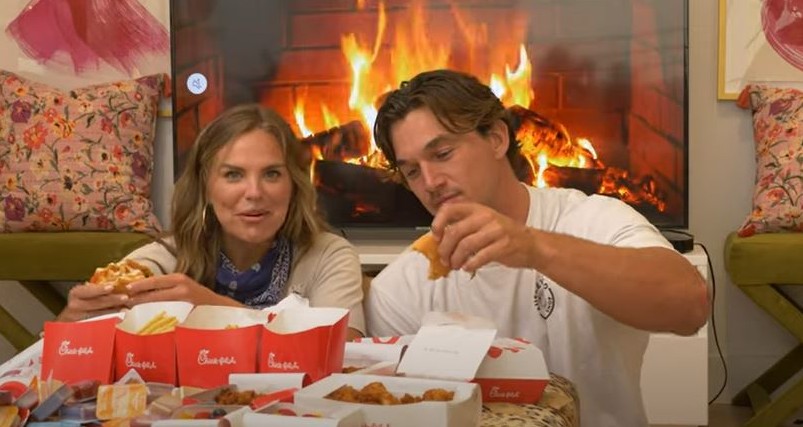 Fans are finally getting an inside look at what has gone on between Hannah Brown and Tyler Cameron. The former Bachelorette and her runner-up reunited recently in California. And, much to fans delight, they have done a YouTube collaboration together. Within this in depth video lies the answers many fans have been dying to know. Have Hannah and Tyler been intimate since The Bachelorette finale aired last year on ABC.

Hannah and Tyler address if they have slept together

Stylecaster shared the spilled tea on whether or not Hannah and Tyler have hooked up. While chowing down on a Chick-fil-a Following the finale last year, Hannah asked Tyler out for a drink. The next morning there were photos of him leaving her apartment. Everyone assumed they hooked up and would start a relationship. That didn’t happen. He actually started dating Gigi Hadid, who recently just became a mom. They obviously didn’t work out either.

Then, Hannah and Tyler ended up quarantining together for 18 days in Jupiter, Florida following his mother’s sudden death. The video shares how Tyler was actually thinking about Hannah and why his mother liked her so much. While having these thoughts, he received a message from Hannah expressing her condolences. They spent three hours talking on the phone that night. Tyler then invited her to Florida to attend the funeral with him.

Following the funeral, Tyler invited Hannah to come quarantine with him and his friends. She accepted. However, he shares he made a rule to not be intimate with her. He realized how vulnerable they both were and didn’t want anything to jeopardize their rebudding friendship. Tyler said, “I made a rule. I’m not hooking up, I’m not doing nothing because I don’t want you to go away and us to do something. And then we’re like, ‘Oh. I don’t feel that.’ And then we’re upset again at each other.”

They didn’t give in

According their YouTube video, Tyler and Hannah stuck to their rule of not hooking up. In fact, they didn’t even kiss the entire time she was there. However, they did share a bed for those 18 days.

And actually, as her time with the quarantine crew drew to a close, they began arguing a bit more. He was annoyed by her wanting to have serious conversations all the time. And, Hannah felt like he was growing cold and also said she just wanted to talk.

Plus, they both admitted fans constantly shipping them together along with the media took a tremendous toll on their relationship. When she left Florida it was months before she reached out to Tyler again. And, when she did it took him awhile to warm back up to her. She says she wasn’t giving up.

So, what does this mean? Well, they are figuring out their friendship and trying to get to a healthy point. They both say they are just friends, but are figuring things out.

And, now everyone finally knows what went down in Florida during quarantine and the months following.

Stay tuned for more details about Hannah and Tyler as they become available.