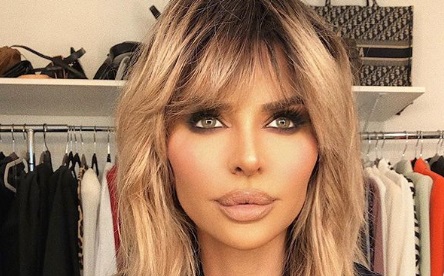 Lisa Rinna encourages her followers to vote, tells them to vote Biden.

The 2.6 million people who follow Lisa Rinna on Instagram have come to expect the unexpected with her. After all, she’s a pretty controversial reality TV star. The Real Housewives of Beverly Hills personality, however, may have taken things too far with her recent Instagram update. Lisa uploaded a photo of herself showing off some serious skin as she rocked a barely-there bikini.

“So a lot of you have been asking about my diet and exercise routine…” Lisa Rinna penned at the beginning of her sizzling bikini snap. Things, however, quickly took a turn. She proceeded to make the post political. And, based on the comments, a lot of her followers were NOT ready for the political shift.

She continued: “I start by voting as early as possible for #joebiden and #kamalaharris and all of the other democratic candidates.”

Lisa Rinna concluded her post explaining that her reasoning for voting for Joe Biden is because President Donald Trump is “racist.”

The post really sent her followers into a frenzy, but not in a good way.

A quick scroll through the comments reveal that Lisa Rinna doesn’t have too many followers that share in her political views. At the very least, those that do didn’t feel the need to be so vocal in the comments. Many were quick to slam the RHOBH for trying to be tricky and force her political views on other people. It certainly sounded like some were hurt as they thought she was actually going to offer diet and exercise tips.

So a lot of you have been asking about my diet and exercise routine: I start by voting as early as possible for #joebiden and #kamalaharris and all of the other democratic candidates. Then try @isaacboots Torch’d class which will tone dat ass so then you can kick some white supremacists ass cuz the president is racist. This was inspired by @zoeisabellakravitz 🙌🏻 #vote

Overall, there didn’t appear to be a comment in sight interested in discussing how she rocked the tiny bikini. Moreover, Trump supporters were quick to flood her comments.