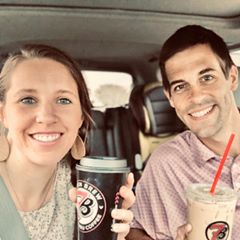 Jill Duggar Dillard isn’t as close to her family as she once was! A recent interview gives fans some answers to their questions! According to People, a new Q&A video posted on YouTube  Wednesday morning. The former Counting On star and her husband Derick Dillard reveals there have been some big changes when it comes to her relationship with her family.

“There’s been some distancing there,” says Jill, 29. “We’re not on the best terms with some of my family. We’ve had some disagreements, but we’re working towards healing definitely and restoration, but we’re having to just take some time and heal. We’re doing what’s best for our family right now and just working through, it. I guess,” she says. “We are praying and trusting God that like the timeline is his and what that looks like and everything. So we appreciate your prayers, and we don’t want to go into detail.”

Jill Duggar doesn’t reveal the reason behind the conflict, but she does address her and Derick’s exit from their reality series.  She has not done things quite as her religious family would. She’s posed in a bathing suit and admitted to drinking alcohol. Jill even says she uses birth control, which is against the religion of her mother and father. The YouTube video filmed with her husband right beside her.  Jill has come clean about many issues in much more detail. She goes on by saying “We left the show three years ago because basically, the family goals that we had for ourselves didn’t align with what we found out.” She continued, “We ended up finding out that we didn’t have as much control over our lives as it related to the show and stuff as we felt like we needed. We had to decide at that time to kind of put the show aside just to pursue our own goals.”

Jill’s plan is to have no plan

After spending a decade on television, leaving was a good decision. She said, “It was a good decision for us.”  Jill continued, “It was a really difficult decision, but something that we knew we needed to do for our family.” Jill says, “we have no plans to return to reality TV.” Could they change their mind and return? “We will not go back on the show. Meaning just like a family, we have to be able to make decisions that allow us to navigate our lives and have the information and control so that we know whether or not we can even plan anything.” Derick says, “We have our lives back now.”