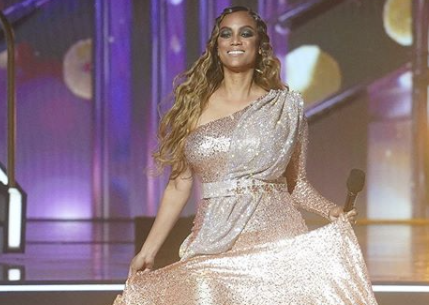 It really seems that Dancing With The Stars viewers are quick to blame Tyra Banks for anything and everything that happens this season. After Monday night’s awkward elimination, several fans jumped on social media to express rude things about the hostess without fully knowing the scope of the situation.

Since Monday’s episode aired, we now know that the mishap was due to an error in the control room. However, the production team wants to make it clear that Tyra definitely did everything in her power to keep the ball rolling.

“I think Tyra dealt with it amazingly,” DWTS executive producer Andrew Llinares told ET. “I just want to be really clear, this was not Tyra’s fault. It was a behind-the-scenes issue.”

Tyra Banks’ Cards Had The Wrong Names On Them

In case you missed it, at the end of the episode, Tyra announced the couples who were safe from elimination, and who were facing the chopping block. At one point, she realized the words she on her cue card didn’t match what the control room was telling her. She already told Monica and Val they would be back next week, but they were actually in the bottom 2.

“This is live TV, right? This is the craziness of live TV!” the hostess said during the blunder. “Again, we apologize for this.”

Tyra apologized in an Instagram story for her error, but fans weren’t having it. Many accused of her of making it up and deflecting the blame. However, Llinares wants to set the record straight once and for all.

“I think we were a little shocked and stunned by what was going on, but this is live TV and you have to deal with situations like this all the time,” Llinares confirmed. “There was a technical issue as the actual votes were coming in last night. What happened was, Tyra actually had the wrong names on her card.”

Bruno Wants All The Haters To Give It A Rest

Judge Bruno Tonioli spoke with Tyra Banks after the show and also believes she handled the situation well.

“It’s live television, things like this happen, especially with information coming in from all over the country, voting and calculating in such a small amount of time,” said Tonioli. “Tyra was brilliant … she was really good because she took control of the situation.”

But that didn’t stop fans from unleashing a firestorm online. Even before the season began, DWTS viewers said they were unwilling to give Tyra a chance as the new host. Now it seems that they will look for any reason to call for her firing. Bruno Tonioli also addressed the cyberbullying that has intensified over the last few months.

“Oh, please. Tyra did a fantastic job. She is doing it the way she wants to do it. It’s a bit tiring, all the negativity, in not even giving people a chance. Just let her be who she is. It’s great to work with her,” he told ET. “We’re in a world that always focuses on the negative and I found that quite upsetting. “ou can’t compare apples to pears, you know? You get different things, and you have to allow someone to do things their own way. The show is good, we’re having a great time, the viewing figures are great, and we all get on. We are trying to give two hours of entertainment and fun to the people, so why don’t [they] focus on that?”

The production team is currently looking into the situation to prevent further errors. Dancing With The Stars returns for 80s Night on Monday.