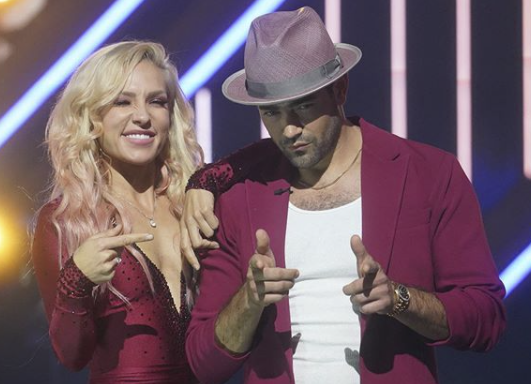 When you’re in the middle of an intense dancing competition like Dancing With The Stars, you’re going to see a few injuries here and there. Celebrity contestant Kaitlyn Bristowe already suffered an ankle injury earlier in the DWTS season and chose to power through. But now, Sharna Burgess has an injury too.

Fans quickly noticed the Australian-native had an ankle wrap on during her performance Monday night. But don’t worry — it’s been there for a while.

“Oh that’s just the first time you all have seen it!” Sharna said to ET. “I’ve been strapping my ankle since week one. I rolled my ankle really badly before our first dance and it is a severe sprain.” She goes on to say it’s very weak at the moment.

This week on DWTS, Sharna and Jesse Metcalfe performed the Cha Cha to Smooth by Rob Thomas and Santana. Even though they scored well, the judges picked on Jesse for his lack of hip action. However, he’s battling through an injury too. Jesse has an arthritic hip.

“They were very critical. I just took it, it’s all good. No excuses, team ‘All In!'” the Desperate Housewives star said. “But I was convinced I might be in the bottom two. I was surprised to get put through to next week.” He continued to praise Sharna for being though and powering through the pain.

If you haven’t seen their week 4 performance, watch it now:

DWTS Fans Can’t Get Enough Of The Chemistry

Sharna and Jesse definitely make a great pair. Fans noticed the chemistry between the two, and it certainly adds to their performances. Their Foxtrot to “Dreams” by Fleetwood Mac had everyone on the edge of their seats.

“This was a song that meant something to Jesse. It was about a lot of the things that he’s had to sacrifice — and some of those things are relationships — to be able to be great at what he does and follow his dreams,” Sharna said to Us Weekly after the performance. “So, we decided together that I would represent one of those relationships that he had to walk away from. So those face holds and when he finally walked away from me at the end, it was that moment of ‘I’m sorry, I have to go, and I have to do this.’”

Dancing With The Stars will be back for another episode on Monday night at 8 PM eastern time. Tune in to ABC to watch it! It’s 80s night and Jesse and Sharna will Tango to “Everybody Wants to Rule The World” by Tears for Fears. Are you excited? Make sure to follow us on social media and never miss another update.