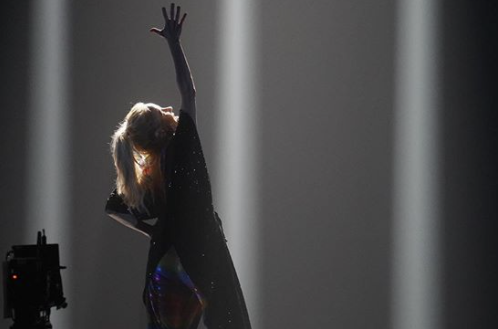 According to judge Bruno Tonioli, there was a mixup in the control room involving a computer error. Hostess Tyra Banks announced Val and Monica were safe. However, she realized the information she had on her cue cards didn’t match what the control room was telling her. Monica and Val had to come back out for elimination, against Anne and Keo. The judges ultimately chose to save Monica and Val.

“That was all so confusing for us,” Anne told ET. “It wasn’t pleasant to be honest.”

According to reports, she left the studio in anger and refused to speak to any press.

Anne Heche Bore Her Soul To The Audience

Anne gave it all on the dance floor and opened up about her experience as a member of the LGBTQ community in Hollywood. The industry wasn’t always so excepting. In the 1990s, Anne Heche was in a high-profile relationship with comedienne Ellen DeGeneres.

In her pre-recorded package, Anne revealed how her romance dramatically impacted her career. She describes the moment when she told studio execs she wanted to bring Ellen as her date to a film premiere. In retaliation, Fox told her that she would lose her contact if she followed through. But Anne refused to let them win, and it greatly cost her. She says she had trouble finding work and did not appear in a studio picture for an entire decade.

“When I told my story last night … it triggered something in me. It took me 20 years to tell my story, and to articulate it the way Dancing With the Stars allowed me to,” she explained. “So to be voted off the same night I told that story, I had a similar feeling to what it was that I experienced years ago.”

Thank you for your support! It means the world to me. Thank you @keo_motsepe @dancingabc and all the beautiful people from #DWTS. Keep rising 🌈✨💝💫

Could She Reconnect With Ellen Soon?

Anne and Ellen split, and Ellen is now happily married to Portia DeRossi. Anne reports that she hasn’t spoken with Ellen in years, but she is definitely open to reconnecting with her former flame.

“With relationships, I think many of us have [been there], you come to a fork in the road, ‘What do you want and what do I want?’ Those goals, that intent in life, is determined by the individual. Her intent and my intent were different and that’s why we separated,” Anne explained. “I was a part of a revolution that helped move equality forward. I would not have been able to do that if I had not fallen in love with Ellen. There is nothing more that I wear with a privilege in my life than being a person who has told the truth, and stands up for it. There is no timeline for truth. I live in love and that’s it.”

Perhaps Ellen will bring Anne Heche on her show now that she’s finished with Dancing With The Stars. Would you like to seem them reconnect? Let us know.