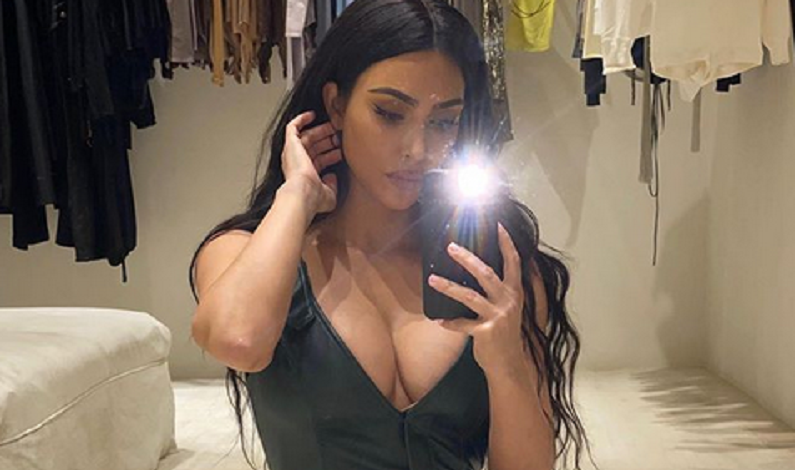 Kim Kardashian revealed that her 40th birthday is canceled. But that hasn’t stopped her from going all out for it. The KUWTK star still has big plans for her day. She says she wants to wear an “insane” outfit. It just won’t be the outfit that she had planned.

Kim canceled her birthday party due to the coronavirus pandemic. She had a big party planned, as well as an over-the-top outfit. As fans know, she loves to make a fashionable statement. It’s likely that the reality star will have her own photoshoot on Instagram on October 21.

Kim teased her outfit planned for her birthday. She wants to celebrate the big 4-0 in a big way.

“I had the best plan. It was going to be called Wild, Wild Miss West’s 40th Birthday,” Kim explained. “I had Manfred Thierry Mugler make me a metal costume. Like, a cowgirl costume.”

It’s the same man who designed her iconic 2019 Met Gala look. Kim wore her hair in wet waves. She wanted to look as if she came out of the ocean, dripping wet. Her dress certainly caused a stir on and off the red carpet. During the interview, Kim says she has the birthday look he’s been working on for months. However, she doesn’t have any plans to wear it on her big day.

The phenomenon that is @kimkardashian is on the cover of Grazia UK this week – as well as 11 international editions of the magazine – to mark shapewear @skims launching at @theofficialselfridges in the UK. Inside she tells @paul_flynn about parenting in a pandemic, putting her 40th birthday plans on hold and the emotional decision to end the longest-running reality TV show Keeping Up With The Kardashians. Out tomorrow in supermarkets and newsagents or TAP the link in bio to get a copy delivered to your door 👆 Photography: @vbuntitled. Hair: @chrisappleton1. Makeup: @makeupbyariel

“I have it and its insane. We did virtual fittings,” she said. “I don’t even want to waste it on a party for myself with five people. I want it to be something. So I’m thinking maybe next year. I can have it on my 41st. We can still call it my 40th, right?”

It sounds like Kim something else planned. While it won’t be as “insane,” it’ll still have people talking. There’s no doubt that Kim will debut her new birthday look on her social media accounts.

Thierry Mugler and Kim Kardashian have a long working relationship. He helped create some of her most eyebrow-raising looks over the years. But her most memorable look is from the Met Gala on May 6, 2019. Kim looked as if she just emerged from the water, covered in crystals that looked like water droplets. Her nude dress perfectly matched her spray tan. Additionally, Kim’s waist looked insanely small thanks to her custom made corset from courier Mister Pearl.

Just a @manfredthierrymugler appreciation post! I was honored to be able to try on and wear so many different looks of his so just had to share some of his magic and these fitting pics ✨ love you Manfred!

He also designed her cleavage-baring gown at the fifth annual Hollywood Beauty Awards on February 17, 2019. He used two slim pieces of fabric to strategically cover her breasts. Then on September 2, 23020, Kim posted some of her favorite looks with the famed designer.