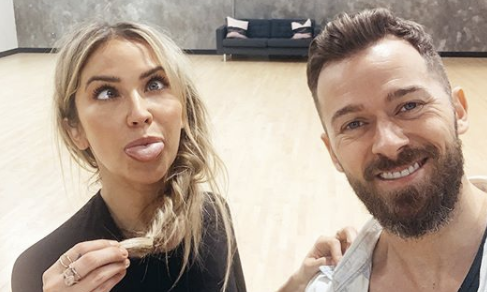 Get ready! When Dancing With The Stars returns next week, it will be 80s Night. Competitors Kaitlyn Bristowe and Artem Chigvintsev already have plans for their next routine on DWTS.

“They’ve seen me do the elegant flowy stuff,” Kaitlyn told ET. “So I think they just wanna see [something] a little bit more upbeat. Which we’re definitely going to bring next week!”

Kaitlyn And Artem Lead The Pack on DWTS

Right now, Artem and Kaitlyn are at the top of the leader board. Across the season’s 4 weeks, they have a combined total of 90 points and an average total of 22.5. The judges react favorably to their routines with each passing week.

However, Nev Schulman and Jenna Johnson are hot on their heels. They have a combined total of 89 points and an average of 22.3. If Artem and Kaitlyn slip up even once, they could definitely lose their top spot.

But Kaitlyn is definitely a fighter and will do everything in her power to stay on top. She suffered an ankle injury during week 2, and still managed to perform through the pain.

“I’ve been rehearsing in heels. I swear, I just like prayed to the ankle gods and it’s like they gave me a new ankle over night,” she told ET. “I mean, it’s still sore, but I don’t care.”

And if you watched them perform, you probably wouldn’t even notice she injured her ankle. It’s truly impressive how she was able to bounce back.

If you missed their performance last night on DWTS, you can watch it here. Kaitlyn and Artem earned the first 9 of the season for their stunning Viennese Waltz.

This Week Was Full Of Emotionally Charged Routines

All the contestants scored higher than normal last night. Fans think it’s because they put all their emotions into the routine. Skai Jackson earned the first 10 of the season for her tribute to her late friend, Cameron Boyce. AJ McLean opened up about the love he has for his fellow Backstreet Boys and how they rose to stardom together.

“He’s just the most fun-loving outgoing supportive human being on the planet,” the former Bachelorette star said. She confirmed he instantly sprang to mind when she found out her song for the week.

Which routine was your favorite last night? Be sure to let us know in the comments. We’re always curious to know what you think.

If you love Kaitlyn and Artem’s performances, make sure to vote and keep them in the competition. Dancing With The Stars returns for 80s Night next Monday at 8 PM on ABC. Tune in and give them your support!

Hannah Brown Talked About Living Up To Impossible Standards Of Pageant Life
Wait, What?! Colton Underwood Getting Netflix Documentary??
Candace Cameron Bure Gets A ‘Fresh’ Look For The Spring — See Photos
‘My 600-lb Life’ Update on Tiffany Barker: Where is She Now?
Robyn Brown ‘Baby Hungry’ & Kody Claims ’70 Is The New 50′