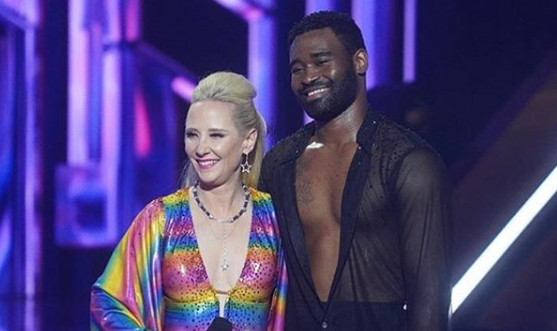 Anne Heche reportedly wasn’t happy with the outcome of last night’s Dancing with the Stars. A source said she furiously stomped off set.  Tyra Banks announced the wrong couple as safe throwing everyone off.

The judges and viewers got confused when Tyra said Monica Aldama and Val Chmerkovskiy were safe. They actually weren’t. Tyra announced there was an error in the control room. She had to call them back up for elimination. She said, “live television folks.” In the end, Anne Heche ended up going home.

According to a source who talked to Page Six, she wasn’t happy and, “drove off the lot and refused to do any press.” Anne was very excited about the upcoming show and shared with her fans. On her Instagram she posted, “Here we go! Tonight I Rise! @katyperry I hope you tune in to @dancingabc where I will talk about my story in the ’90s and how standing up for #lgbtq rights impacted my career in a way that it would not today.”

She performed the Paso Doble wearing a rainbow outfit and spoke up for being open and proud. Fans shared their praise on her social media about her performance.

Did She Calm Down After Leaving The Show Angry?

When she appeared on Good Morning America this morning, she had calmed down a bit. Last night she said she felt blessed to be on the show. Anne Heche said it was also a blessing, “to be able to tell my story. And to be able to have a partner to tell the truth with and to learn with.”

Here we go! Tonight I Rise! @katyperry I hope you tune in to @dancingabc where I will talk about my story in the ’90s and how standing up for #lgbtq rights impacted my career in a way that it would not today. Whatever the consequences of that were, the good far outweighs the bad, and I would not change any of it. I hope that by living my life in honesty helped move the needle of acceptance. I will always fight for the right to live openly and proudly in truth! 🌈💖 Here’s how to vote for me: 1️⃣ Get ready to vote right at 5pm PT (8pm ET) 2️⃣ Vote 10 times online (DWTSvote.abc.com) 3️⃣ Vote 10 times via text (text ANNE to 21523) #dwts #dancingwiththestars

She said she took a stand ten years ago, and twenty, and she stands for it today. On her last Instagram post she said, “stay true to who you are and never stop rising.” In an interview with Entertainment Tonight she talked about how it felt to leave. She said, “That was all so confusing for us. It wasn’t pleasant to be honest.”

She said opening up about her story in the beginning of the show, “triggered something in her.” It took her twenty years to tell her story, to articulate it the way she wanted. Anne opened up about her relationship with Ellen DeGeneres and how it cost her a huge movie deal. Being in an open relationship with a woman back then was way different than it is today. She said, “to be voted off the same night I told that story, I had a similar feeling to what it was that I experienced years ago.”

Anne said she will continue taking dance lessons. Dancing with the Stars airs every Monday night.

Kylie Jenner Gets Candid On Hiding Personality From Fans
’90 Day Fiancé’ The Other Way’: Sumit Goes To Court To Face Charges Filed By His Wife
‘OutDaughtered’ Fans Are Concerned About Adam Busby & Parker’s Relationship
Why Braunwyn Windham-Burke Was Scared Before Her Sobriety
Tyler Cameron Poses Nude On Instagram