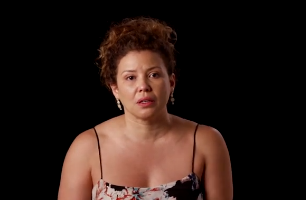 Last night’s Dancing With The Stars episode certainly had a lot of surprises. One of the best surprises was the show’s opening. Viewers certainly thought they were about to see a public service announcement on a serious issue. But that’s not quite what happened.

“We’re here tonight to speak to you about a problem that’s affecting so many inspiring dancers,” Nelly begins.

“A problem so big we have to speak up,” Justina adds.

“The problem we’re speaking about is…” Jeannie begins before dramatically looking down from the camera, “Judges comments.”

Chrishell Stause adds that the comments are particularly hurtful because celebrities “have fragile egos.” The rest of the contestants chime in with specific comments they were offended by this season. Nev Schulman brings up the time Derek Hough remarked about his excessive chest hair. As the PSA concludes, it is revealed that the ad was sponsored by “Celebrities Who Don’t Like Criticism.”

If you didn’t catch the beginning of Dancing With The Stars last night, you can see it on their Instagram page. Fans thought it was absolutely hilarious.

A very important PSA! We'll see you in ONE HOUR for an all-new episode of #DWTS on ABC.

DWTS Judges Acknowledge They Can Be A Little Tough

It looks like the judges really took notice of the online criticism. For weeks, DWTS viewers complained that the judges are way too harsh this year.

Derek Hough is keenly aware what viewers think of him. However, he argues he gives a lot of constructive criticism because he has a lot of respect for the contestants.

“I had no intention to be tough or anything like that, but I guess what I realize, for me, is that I think I just have a lot of respect,” the newest DWTS judge told Us Weekly. “I have a lot of respect for these celebrities and what they’re doing and I genuinely want to give them some feedback. ‘Cause I know for me when I was a pro, I wanted actual feedback. I want to learn how to be better. So that’s what I’ve always wanted to do.”

Will The Criticism Inspire Growth?

Skai Jackson’s fans have probably been the most vocal about the tough judging this year. During week 2, Carole Baskin actually scored higher than Skai did, leaving everyone completely taken aback. But it seems like the tough love really worked in her favor. Skai earned 28 points last night and the first 10 of the season.

In fact, everyone earned higher scores last night. Do you think the judges were softer or did everyone step up their game? Let us know your opinions.

Don’t forget to tune in to the next exciting installment of Dancing With The Stars on Monday night on ABC. Next week is 80s Night. Are you excited? Who do you think will take home the Mirrorball Trophy? Let us know what you think. Follow us on social media for all the latest news!