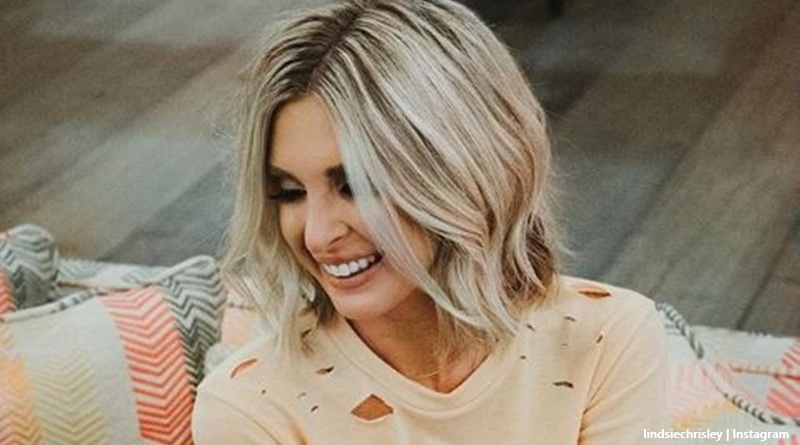 Lindsie Chrisley Campbell had a lot to say to her Instagram followers a few hours ago. And it was a super relatable post as we transition from summer to fall. Now, some fans may have noticed Lindsie hasn’t been super active on social media lately. As it turns out, she and her family recently returned from a vacation. So, this lengthy update was especially appreciated after she’d been scarce on Instagram for a little while.

Fall is finally upon us. Temperatures are starting to drop. For some, we are experiencing 30 and 70 degree weather on the same day. And Lindsie decided she wanted to talk about it with her fans.

Lindsie jokingly referred to this time of the year as the time when a person starts the day with a sweater or long sleeve thick shirt and ends the day regretting the decision to dress so warmly.

Lindsie Chrisley admits she’s thinking about putting her shorts away as we transition out of summer. She, however, didn’t seem completely sure if she was ready to do that just yet.

The black sheep of the Chrisley family also wondered if anyone else disliked the transition period as much as she does. She more or less seemed to be fixated on not knowing whether a sweater is a good idea being inconvenient.

Her son Jackson is really in the Halloween spirit.

Lindsie Chrisley admits her young son Jackson has already gotten into the Halloween spirit. Unfortunately, it hasn’t exactly been a fun experience for her. Turns out, Jackson is a bit of a trickster!

As she reveals in the screenshot of her Instagram post below, Jackson got fake fluffy spiders from the Dollar Store recently. And, he is having a field day scaring his mother with them. 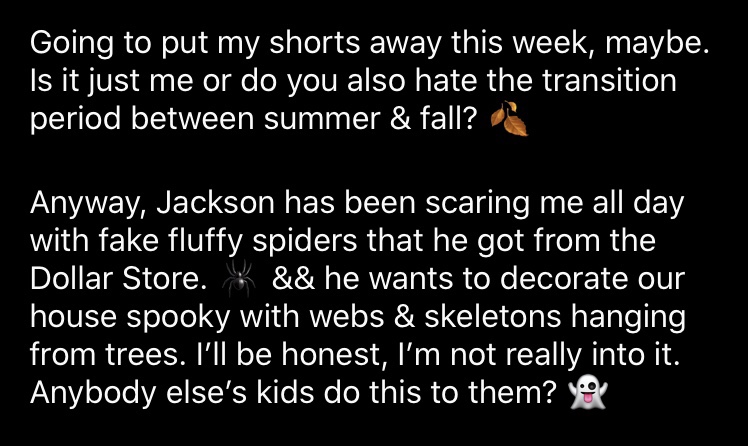 She continued to reveal that her son Jackson wanted to deck their home out in spooky decor this year. He was interested in spider webs and skeletons. And, she wasn’t here for it. She concluded by asking if any of her followers have kids that pressure them into embracing the scary side of Halloween.

What did her followers think?

Now, Lindsie Chrisley also mentioned the Chris Watts documentary that dropped on Netflix recently on the post. And, this was the only thing her followers seemed interested in discussing. Lindsie promised to share her thoughts on the documentary during her next podcast.

It’s officially that “wear a sweater in the morning, regret it in the afternoon” type of weather. ⁣ ⁣ 🧡🧡🧡 ⁣ ⁣ Going to put my shorts away this week, maybe. Is it just me or do you also hate the transition period between summer & fall? 🍂⁣ ⁣ Anyway, Jackson has been scaring me all day with fake fluffy spiders that he got from the Dollar Store. 🕷 && he wants to decorate our house spooky with webs & skeletons hanging from trees. I’ll be honest, I’m not really into it. Anybody else’s kids do this to them? 👻 ⁣ ⁣ For everyone messaging me about the Chris Watts Netflix documentary that was released last week, yes I’ve watched it. Of course! 📰 Going to share my thoughts on @coffeeconvospodcast this week. 👀 What did y’all think about it? I’m a big true crime fan, but this one truly made me sick. Also, something didn’t sit right with me about the girlfriend Nicole. Will discuss theory on that on Thursday. I’m off to bed, this grandma needs some sleep. ♥️⁣

A post shared by Lindsie Chrisley Campbell (@lindsiechrisley) on Oct 5, 2020 at 5:36pm PDT

A few of her followers admitted they were unwilling to give up shorts. Instead, they slap a pair of leggings underneath to keep warm.

So, is it time to put away your shorts? Share your thoughts in the comments.