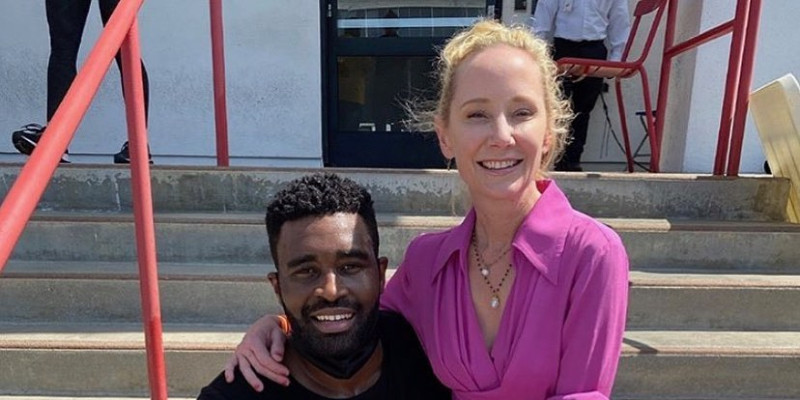 TV fans know Ellen DeGeneres primarily as a host extraordinaire. But in the 1990s, she was at the center of a huge scandal. First for coming out as a lesbian and then for her relationship with actress Anne Heche. Believe it or not, being openly gay was still taboo in the 90s!

In fact, Ellen’s primetime sitcom, Ellen, was cancelled within a year of her public coming out. But not much attention has been given to Anne Heche’s side of the relationship. Until now.

Anne Heche is not a household name. It’s been 20 years since her relationship with Ellen DeGeneres. So, DWTS’ announcement last month that she was joining the show for Season 29 had a lot of people scratching their heads.

She is well-known in the soap opera community, where fans remember her fantastic performance as twins on Another World. From soaps, she leaped into movies. In fact, her most well-known movie was also her last blockbuster. She believes this is due to her relationship with another woman.

Her Relationship With Ellen Had ‘Consequences’

In a preview of tonight’s episode, People reports that Anne gets vulnerable with her pro partner, Keo Motsepe. She talks about how she started dating Ellen in 1997 after meeting at a party. When Anne wanted Ellen to be her date at a movie premiere, she got pushback from Fox studios.

Anne recounted the memory for Keo (and viewers.) She said, “My movie premiere for Volcano, I had told them that I was taking Ellen as my date and I was told if I took Ellen I would lose my Fox contract.”

People reports that Fox never got back to them with a comment. However, Anne is adamant that the “stigma” of her relationship had dire consequences. Those consequences included losing a “multi-million dollar picture deal.” Additionally, Anne says she “did not work in a studio picture for 10 years.”

Anne Heche and Ellen DeGeneres dated from 1997 until 2000. Anne has gone on to date both men and women since the split. Ellen is now happily married to actress Portia de Rossi.

The actress took to her Instagram to encourage fans to watch DWTS tonight. She writes, “I hope you tune in to @dancingabc where I will talk about my story in the ’90s and how standing up for #lgbtq rights impacted my career in a way that it would not today.”

Anne goes on to write that she “wouldn’t change” anything about her past. She also notes that she will “always fight” for LGBTQ rights. She reveals that she will dance with partner Keo Motsepe to “Rise” by Katy Perry.

Here we go! Tonight I Rise! @katyperry I hope you tune in to @dancingabc where I will talk about my story in the ’90s and how standing up for #lgbtq rights impacted my career in a way that it would not today. Whatever the consequences of that were, the good far outweighs the bad, and I would not change any of it. I hope that by living my life in honesty helped move the needle of acceptance. I will always fight for the right to live openly and proudly in truth! 🌈💖 Here’s how to vote for me: 1️⃣ Get ready to vote right at 5pm PT (8pm ET) 2️⃣ Vote 10 times online (DWTSvote.abc.com) 3️⃣ Vote 10 times via text (text ANNE to 21523) #dwts #dancingwiththestars

The Monday, October 5 episode will be an emotional one for sure. Actress Skai Jackson pays tribute to a former co-star during her routine.

As DWTS viewers know, Anne landed in the bottom last week due to slip-ups during her dance routine. That puts her at extra risk for tonight’s elimination.

Tune in to Dancing With The Stars Mondays on ABC.

‘Breaking Amish’ Betsy Yoder May Not Be In Headlines, Has Major News
Jeremiah Duggar’s Rumored Girlfriend Deletes Courtship Evidence
‘My 600-Lb Life’ Update On Shannon Lowery
Is ‘When Calls The Heart’ Season 8 Setting Up For Lori Loughlin’s Return?
Has ‘Welcome To Plathville’ Been Renewed Or Canceled For Season 3?