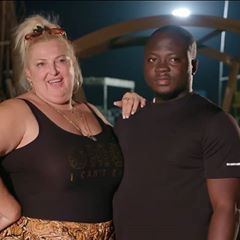 Angela Deems wore a mysterious black mask for the 90 Day Fiance Tell- All. But Angela’s excuse for the mask doesn’t sit right with fans!

Fans thought Angela could be wearing a face mask due to the current pandemic. Angela Deem claimed that her mask was due to an abscessed tooth. She went on to claim that air couldn’t get to the tooth because it would make it worse. Fans aren’t buying this excuse and think there may be another reason.

Angela Hints to a New Show

On a recent Instagram, post views saw Angela hint to the making of her own show. On Angela’s Instagram Story she posted an article with a circled paragraph that talked about her spending time with her manager and celebrity trainer Natasha Fett. Natasha Fett was a big part of Mama June’s weight loss transformation, according to Good Housekeeping.

Micheal and Angela’s age gap, cultural differences, a cheating scandal, and obviously, some trust issues have caused drama with the couple from the start of 90 Day Fiance: Happily Ever After. Angela Deem, 53, and her partner Michael llesanmi, 31, finally tied the knot on the show’s last episode. The spousal visa seems to be the latest obstacle for the couple. This is why fans awaited to watch her on the Tell-All where Angela appears in a black mask.

Fans have taken to social media to place their guesses on the real reason that Angela is wearing a face covering. One viewer noticed that Angela also has a big scrape on one of her arms. That when they started to question whether Mrs. Angela Deem could have been in the losing end of a fight? Could it be that Angela fell and maybe broke a tooth? It seems possible.

The Most Plausible Reason

Another fan posted a very good possibility and the reasoning is sound! Could Angel be covering up with a face mask be due to new teeth? Maybe some fresh white Veneers? If Angela is starring in a body transformation show then she could be hiding her teeth under that black cloth. Fans jumped on this idea and are hoping this is true. Her supporters are excited to see what the newlywed grandmother will look like!

None of these theories are confirmed by the cast of the show or The 90 Day Fiance Franchise. It seems like fans will just have to wait to see what happens with the spicy Georgia grandmother.