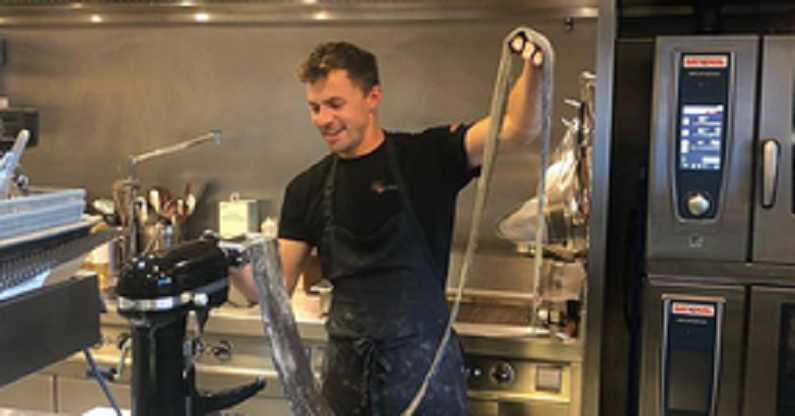 Below Deck Med chef Tom Checketts made a splash on the show. He’s had several blowups in the galley. Since celebrity chef Gordon Ramsey trained him, he has high expectations for his work. On Monday night’s episode of Below Deck Mediterranean, he felt that “cake” felt like a four-letter word.

As fans already know, he gets hives when he gets a request to make a cake for the charter guests. But what gives him nightmares? Chief stew Christine “Bugsy” Drake shared that tidbit in the preview for the upcoming episode. She ended up in an awkward situation after a guest sent a plate back.

Tom Checketts gets nightmares over this issue

Bravo released the preview clip for the next episode of Below Deck Med. While most of the guests are happy about Tom’s meal, the primary sends her plate back. She previously said that she doesn’t eat beef. The primary charter guest was difficult in the previous episode as well.

One of the guests informs Bugsy that the primary guest, Z, doesn’t eat beef. Drake doesn’t know what to do. She’s concerned about bringing the plate back to Tom. She knows that it’ll cause him to spiral. A plate sent back often haunts Tom’s dreams.

“Ugh, having things sent back is Tom’s worst nightmare,” Drake reveals during her confessional. “I know that.”

Bugsy stands in front of the guests and graciously presents the full meal. Then the primary guest asks her if she’ll get chicken. “I’ll find out,” the chief stewardess responds. “All I know is it won’t be beef.”

A chef is making you breakfast. Who do you hire and what do you order? 🍳

Bugsy doesn’t want to send back the plate. So she gets second stew Aesha Scott to do the dirty work for her. “Um, Z doesn’t eat beef,” she casually tells Tom.

“What?” he asks. “Oh s***,” he says as he walks away. “Alright, this is gonna be a moment or two.” Tom walks out of the galley to collect his cool. He then prepares a chicken for the primary charter guest.

Below Deck Med crew brace themselves for Tom’s wrath

At first, Tom handles the request well. But everyone on board is cautious, especially Aesha. Tom already made her cry after he was disturbed during his break. Captain Sandy Yawn asked him to get a cucumber and other snacks since the guests were hungry. Tom was so irate that he made Aesha burst into tears.

There's more to @tomjchecketts than just dishes and dimples. Get to know The Wellington's charming new chef! #BelowDeckMed

He already had several meltdowns in the galley. Tom willingly yells at whoever is in the room with him. He lost it on several occasions when provisions gave him frozen fish instead of fresh fish. Captain Sandy tried to soothe things over, but it just made matters worse.

Fans will have to find out what happens next. Below Deck Med airs Monday night at 9 p.m. ET on Bravo.