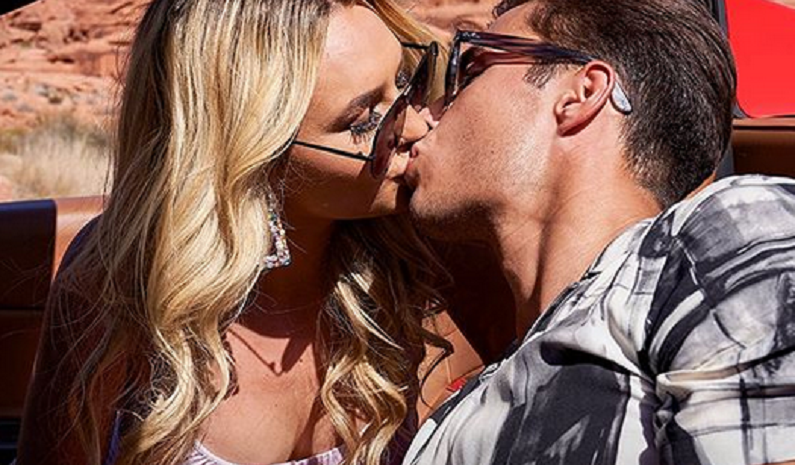 Love Island Season 2 ended with a high note on Wednesday night. Justine Ndiba and Caleb Corprew were crowned the winners. The couple will also take home the grand prize of $100,000 after a month of re-coupling, hookups, tears, and drama. Justine and Caleb became the first black couple to win the dating competition show.

Season 2 was a wild one. Casa Amor, anyone? It was the first time that Casa Amor was featured in the U.S. version of the show. While most of them survived, it’s any wonder if they will also survive the real world. Find out which Love Island couples will stay together.

Love Island fans didn’t like Carrington from the start. They hated the way he treated the girls in the villa. Then he found himself fixated on the new girl Lakeyn Call. But he ended up choosing Laurel over her.

Many fans have a feeling that Carrington will end up ghosting her after the show. Their first and final date in the villa made it seem like he loved the sports car more than Laurel. As per Screen Rant, Carrington hasn’t even followed Laurel back on Instagram. This does not bode well for the couple’s future.

No matter which Villa, Laurel & Carrington followed the path their hearts laid out for them, leading them to this moment together. 💖 Spread love in the comments! #LoveIslandUSA

Moira had trouble getting her footing in the villa. At first, she liked James. Then, she wanted Calvin, and later had feelings for Connor. Then, she was into Aaron and Bennet along the way. But she found herself back in Calvin’s arms.

Love Island fans couldn’t keep up with Moira’s love life. Many called her out for being insincere. They think she pretended to show interest in Calvin just to stay in the villa. But there are others who think that Calvin and Moira should have come in second.

There’s obvious chemistry between them. But it’s any wonder if they will fall in love outside the villa. Calvin did recite a beautiful poem to Moira. As he got down on one knee, his speech had fans buzzing about their future together.

A full circle moment for these two… 💕 #LoveIslandUSA

It seemed like this couple was going to win Love Island. That is until Casa Amor happened. Love Island fans were over Johnny after his secret bed romp with Mercades Schell. Additionally, Johnny’s ex-fiance came out and exposed him on social media.

Little does Cely know he was engaged before going on the show. Many think Johnny won’t leave his playboy lifestyle behind. The couple hasn’t tagged each other in their latest Instagram posts. It’s likely that Cely and Johnny’s love will fizzle shortly after leaving the villa.

"Closer together each day." ✨ #LoveIslandUSA

Their summer love had America rooting for them. Justine and Caleb were the rightful winners of $100,000. They were known for their drama-free and healthy relationship. The self-proclaimed “king and queen” of the villa were in the running for weeks, so this comes as no surprise to fans.

In an interview with Entertainment Tonight, the couple revealed that they are “very serious” about having a future together. Justine and Caleb respectively live in New Jersey and Los Angeles. The go-go dancer told the outlet that she wants to move to L.A. to be with Caleb. Meanwhile, Caleb wants to go all out on their next date thanks to the $50,000 he now has.

Who do you think will last? Sound off below in the comments section.