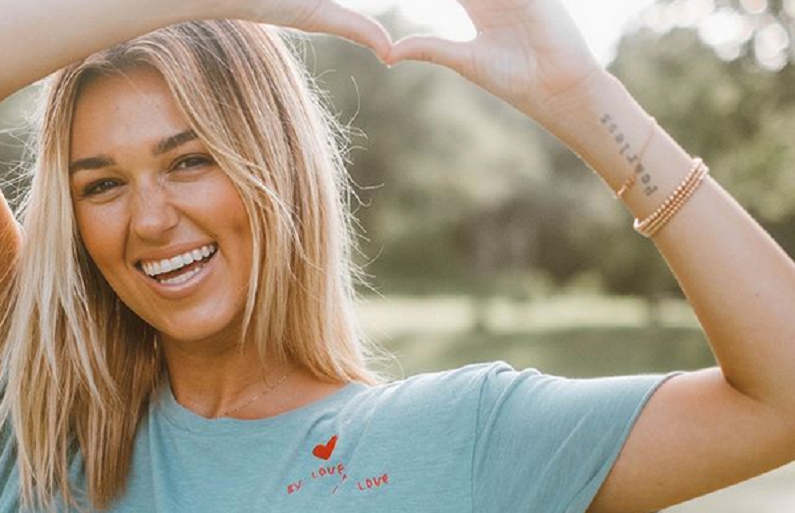 Sadie Robertson shared the details of her eating disorder. She first opened up about it in 2017. It developed shortly after she competed on Dancing With the Stars. People body shamed her for regaining back most of the weight lost while competing on the show.

The Duck Dynasty star lost weight from training on DWTS. Sadie regained most of her curves after the show ended. And that didn’t stop people from making rude comments about her body. The Live Original blogger revealed that the body shaming comments led to her eating disorder.

Sadie Robertson spoke exclusively to Entertainment Tonight about her body image struggles. During the interview, the “WHOA That’s Good” podcast host recalled the moment when she developed an eating disorder. She enjoyed Thanksgiving with her friends and family. But then Sadie started to notice the crude remarks about her body.

“During Dancing with the Stars … I had this body that I never thought I’d have,” Sadie explained. “I had a six-pack for two weeks, but then Thanksgiving hit and it went away. People started to comment.”

It wasn’t just strangers. Sadie also had “negative influences” around her that “would say things that were not uplifting.” These people offered unsolicited advice on how she should care for her body. Looking back, she can tell how “wrong” they were. But since Sadie was feeling so “insecure” at the time, she “believed” them.

Sadie Robertson opens up about her eating disorder

The Christian speaker was only 17 at the time. In her mind, Sadie Robertson wanted to become a fashion model after the show. The comments coupled with the influence of the fashion industry led to “a really unhealthy view” of her body.

“People would say things like, ‘Oh, if you lost 10 more pounds, you would look like a real model,'” Sadie continued. “I was literally 115 pounds and already unhealthy. That just messed my mind up.”

Sadie eventually developed an eating disorder and body dysmoprhia. She told ET that she would spend most of her days counting calories. Suddenly, she developed an unhealthy attitude about eating and staying fit.

“I would look at myself in the mirror and I would think, ‘I’m fat,’ and I was not at all,” she said.

HEY ! YOU ! You rock. You’re loved. You’re enough. You’re gonna make it. You’re worth making it. Because you have a creator who has purposed you for you today and who is wild about ya. Take it and believe it friends !!!!

The 23-year-old credits her faith for helping her overcome her eating disorder. God helped her get through those tough times in her life. She has learned how to love herself. Her faith also allows her to care for others.

“It definitely made me stop thinking about myself as much,” she admits. “It allowed me to be able to think of others, and how I can serve them with the body I’ve been given.”

Since competing on DWTS, Sadie admits she was lost. She had to look to God for guidance. That’s when she realized her faith was going to be “everything” to her from that moment on. It led her to start the Live Original ministry, which offers young Christians with an online community.